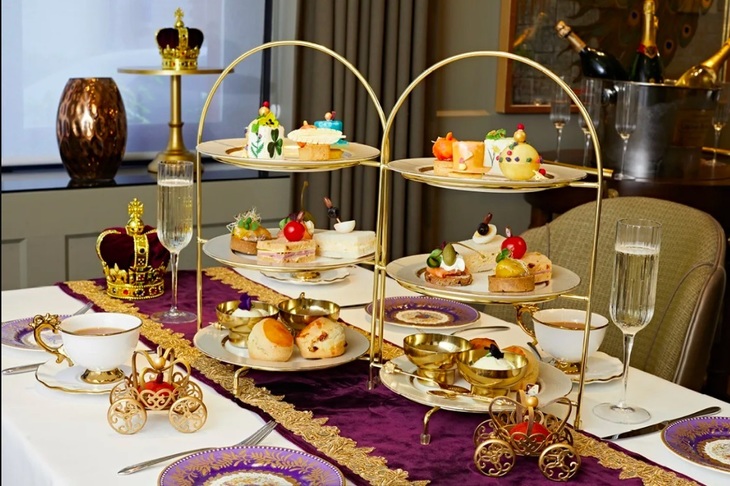 The Queen’s Platinum Jubilee is celebrated Thursday 2-Sunday 5 June 2022 (which includes two bank holidays — win!). There’s a wealth of events to mark the occasion, but if you fancy going really regal, how about afternoon tea? These special Platinum Jubilee afternoon tea menus are all being served in the capital, meaning you can munch your way through corgis, crowns, and even the Queen’s handbag — all over town.

Located a five-minute walk from Buckingham Palace, and within the Taj 51 Buckingham Gate Hotel which has hosted the Queen and other Royals in the past, Kona has launched a Queen’s Platinum Jubilee afternoon tea with a very regal twist. Think pastries served in miniature carriages, chocolate biscuit cake in the shape of the orb and sceptre used during the coronation, and a ‘Gardens of Britain’ dessert, which brings together edible flowers from all four nations.

The Queen’s Platinum Jubilee Afternoon Tea at Kona. Available daily. £70 per person, or £95 with champagne. 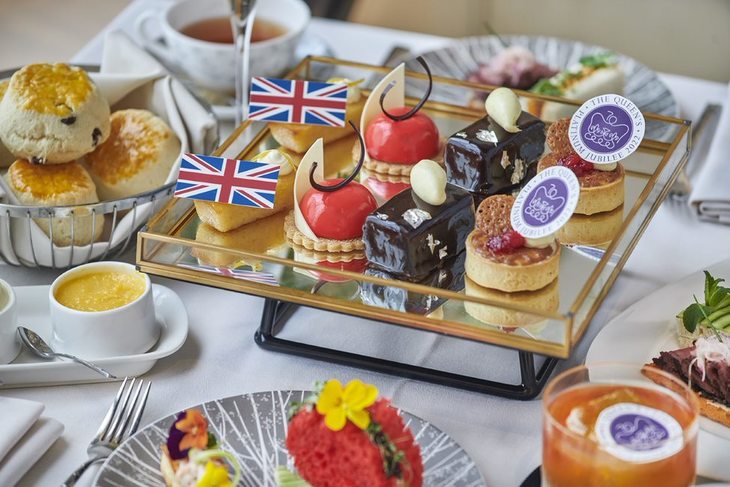 You can pimp your afternoon tea with a glass of bubbles. Image: InterContinental London Park Lane

InterContinental London Park Lane is on the site of 145 Piccadilly, where the Queen lived as a child, so it’s apt that her Platinum Jubilee is being celebrated here. 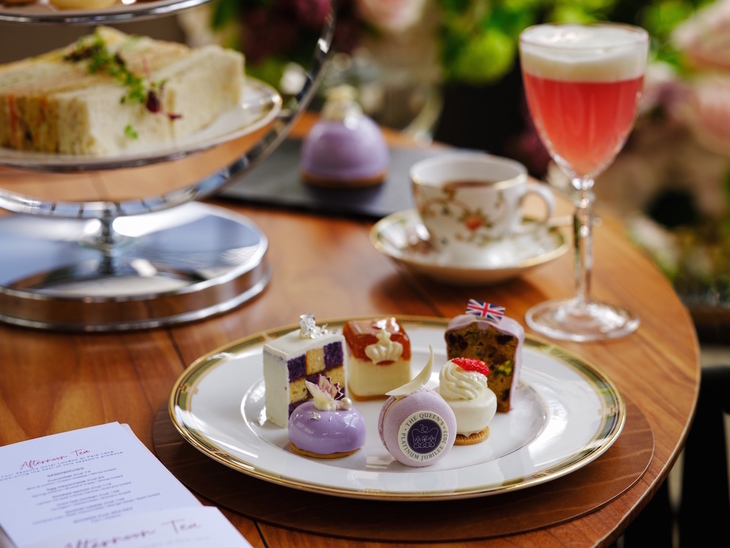 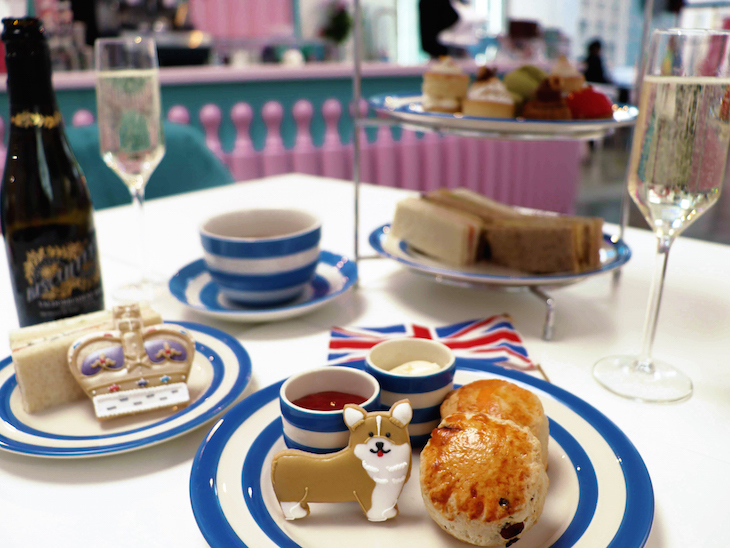 Wrong to want to bite its head off? Image: Biscuiteers

Both branches of biscuit-based business Biscuiteers celebrate the Jubilee with a special afternoon tea. Tuck into treats including a rhubarb and chocolate cheesecake, and a yuzu and lemon meringue tart, along with Jubilee-themed hand-iced biscuits such as the cute corgi, pictured above. Both cafes have had a regal-themed makeover too, to get you in the spirit.

Biscuiteers is also running special royal-themed icing classes, and you can buy special edition tins of the hand-iced biscuits to take home with you, or to send to family and friends.

Jubilee Afternoon Tea at Biscuiteers. Available at both branches until the end of June. £38 per person, or £44 with a glass of prosecco. 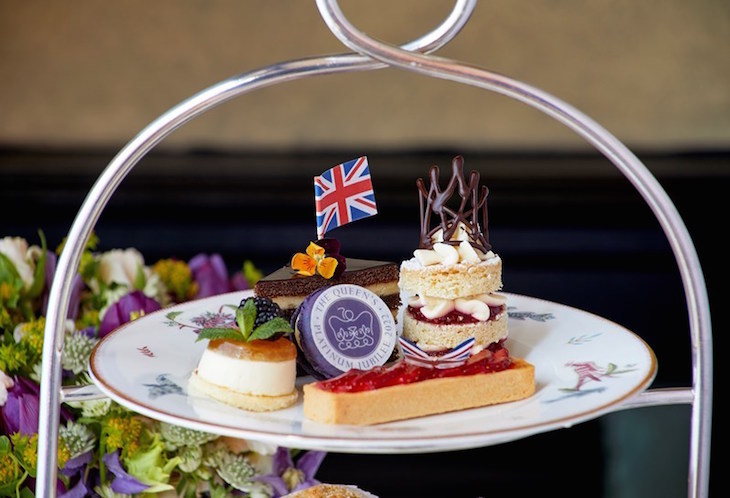 Brasserie Max at the Covent Garden Hotel serves a Royal Afternoon Tea, consisting of a selection of tea sandwiches such as coronation chicken and smoked salmon and cream cheese bagels, followed by (hello!) Pimm’s cheesecake and Victoria sponge, homemade scones with clotted cream and preserves

Royal Afternoon Tea at Covent Garden Hotel. Available throughout the Jubilee week. £35 per person, or £48 with a glass of champagne or a cocktail. 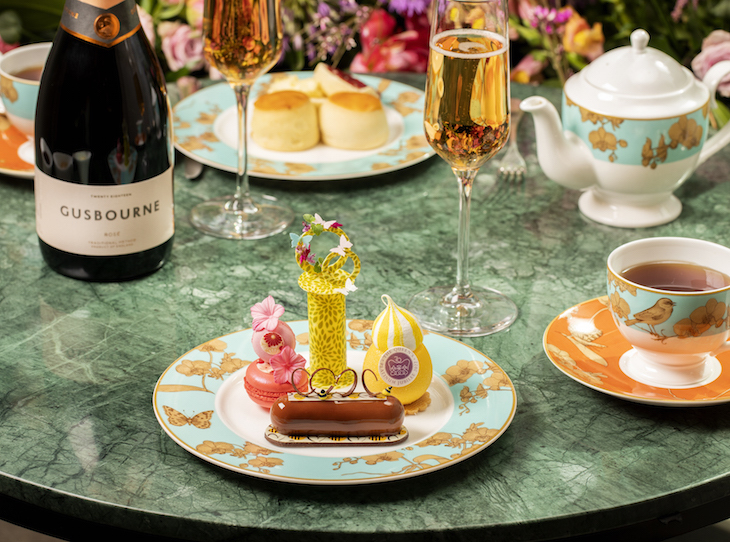 You even get a sachet of wildflower seeds to take home. Image: Pan Pacific London

Crowns and Union Jacks not really doing it for you? Pan Pacific London offers an alternative in the form of Superbloom Afternoon Tea, served in The Orchid Lounge. It’s inspired by the Superbloom wildlflower installation taking over the Tower of London moat this summer.

Coronation chicken, smoked salmon and cucumber and cream cheese sandwiches are on the menu, along with plain and raisin scones. Four special desserts have been created for the occasion; The Queen ‘honey’ Bee, a heather flower honey, chocolate sponge, crunchy pecan praline; The Wild Rose, an English rose macaroon with strawberry and lime jelly; the Lemon Meringue, a British lemon shortbread, with lemon curd and lemon mousse; and The Tower of London, a pistachio financier, with mascarpone and raspberry. Other touches include a tea and biscuit flavoured amuse bouche, street party-inspired candy floss and a corgi shortbread — plus you’ll receive a sachet of wildflower seeds to take home. 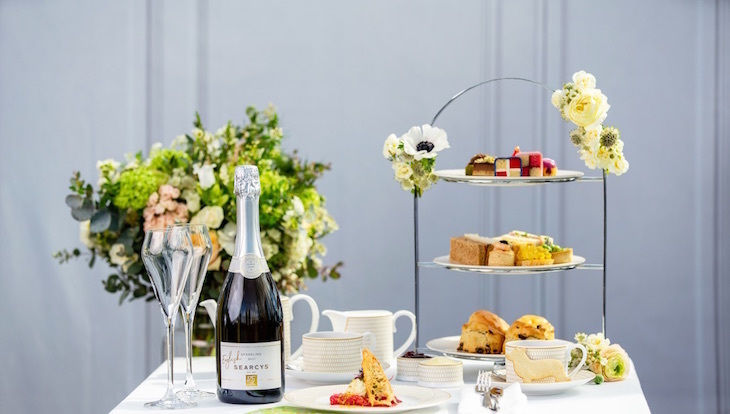 Several Searcys venues, including 116 Pall Mall and the restaurant at the top of The Gherkin, give their afternoon tea menus a royal twist.

The menu includes savouries and sandwiches, along with sweet treats of Searcys signature Victoria sponge, a patriotic red, white and blue Union Jack Battenberg (the cake was named in honour of the 1884 marriage of Princess Victoria to Prince Louis of Battenberg), and a chocolate, cherry and pistachio delice.

Jubilee Afternoon Tea at Searcys. Available 21 May-25 June. From £49 per person. 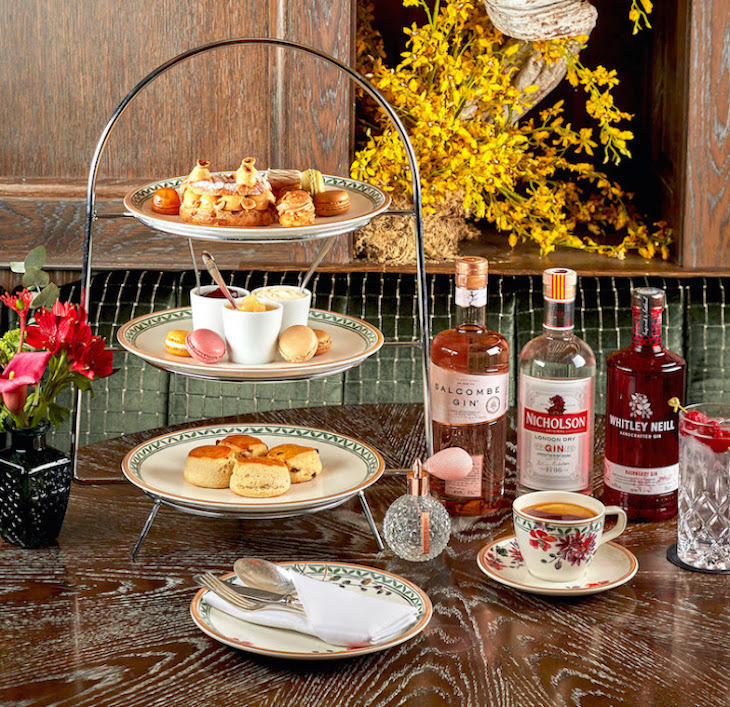 Dubonnet is widely rumoured to be the Queen’s tipple of choice, so Manetta’s Bar — located within Flemings Hotel in Mayfair — has made a unique gin cocktail which uses the aperitif a key part of its Jubilee menu.

The full Royal G & Tea cream tea experience also includes plain and fruit scones, clotted cream, a selection of teas, mini patisseries and macarons, plus one of three gin tipples, as well as that Dubonnet cocktail to wash it all down. Hic. 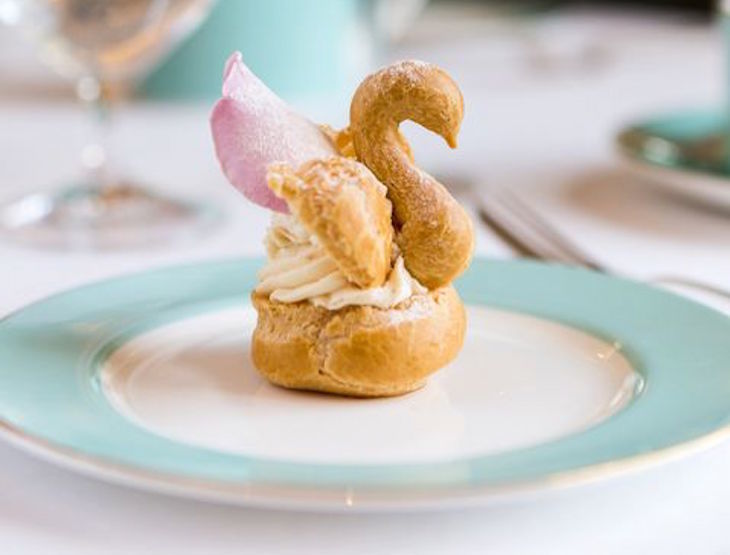 The Queen opened Fortnum & Mason’s Diamond Jubilee Tea Salon for — yep, you guessed it — her Diamond Jubilee, back in 2012. A decade on, they’re celebrating her Platinum Jubilee with a special menu, featuring a traditional afternoon tea, a Savoury Tea, and a High Tea later in the day.

The cakes and pastries are particularly regal. The swan-shaped Choux Swan, filled with violet crème pâtissière and finished with a real rose petal, is a reference to the Queen owning all the swans in the UK. The Chocolate Orb is a smooth chocolate marquise mousse crowned with a pearl in tribute to the crown jewels. 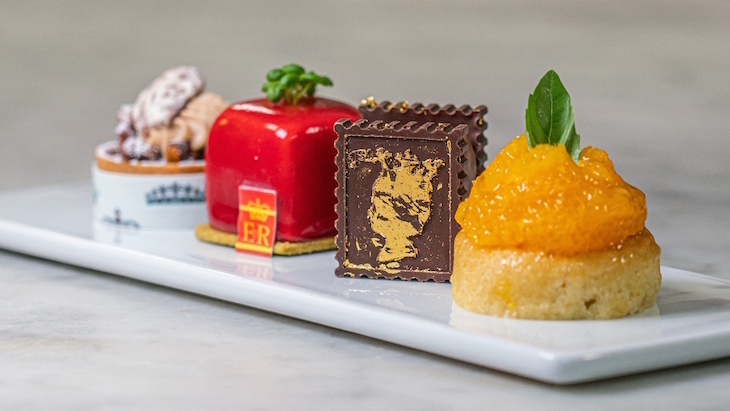 No one’s committed to the royal theme quite like chef Sally Abé, responsible for the RoyalTea served in The Orchard Room restaurant.

She’s used ingredients that have their own Royal Warrants, from brands including Lyle’s, Rowntree’s, and Wilkin & Sons, purveyors of Tiptree jams. The pinnacle of the experience is ‘Liz’s choccy biccy sandwich’, her take on the Queen’s favourite chocolate biscuit, made from pieces of biscuit and chocolate mousse coated in chocolate — and fashioned to look like a postage stamp, with the Queen’s head on it.

A strawberry Victoria sponge, a treacle and pecan tart and a glazed Seville marmalade cake round up the sweet section of the menu, while traditional sandwiches such as coronation chicken, truffled egg mayonnaise with watercress, and cucumber and white pepper with mint also feature.

RoyalTea at Conrad St James. Available Wednesday-Sunday. From £45 per person. 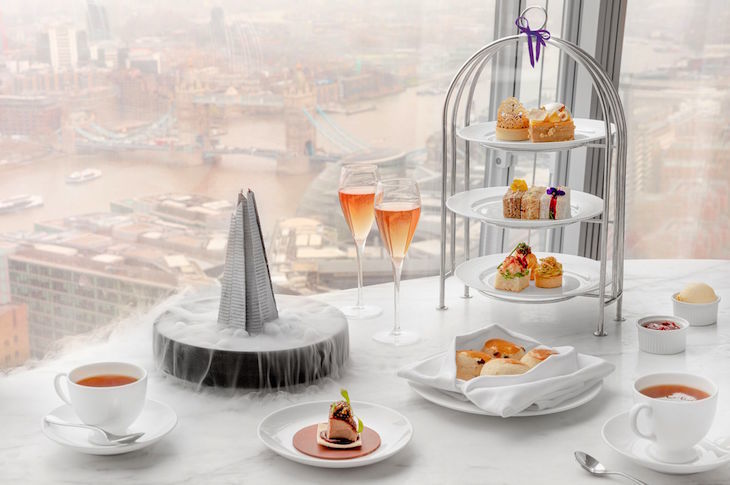 Ting Restaurant at Shangri-La The Shard, located on the 35th level of the skyscraper, launches a Skyline Afternoon Tea as part of its Jubilee celebrations.

The centrepiece is a miniature chocolate and raspberry Shard building for two to share. A selection of finger sandwiches is followed by savouries such as Mary rose and caviar and almond tart with marinated courgette and basil. Freshly baked sweet and savoury scones with strawberry jam and clotted cream lead into a selection of Jubilee themed desserts including The Pearl of the Queen, a tonka, vanilla and strawberry gateaux and Jubilee Tart, a crowned lime and blueberry creation.

The restaurant and hotel decor is having a Royal-themed makeover too, including a display of crown sculptures, and photo opportunities inspired by the Queen’s many tours abroad.

Skyline Afternoon Tea at Shangri-La The Shard. Available until 30 September. From £65 per person, or from £75 with a glass of champagne or a cocktail. 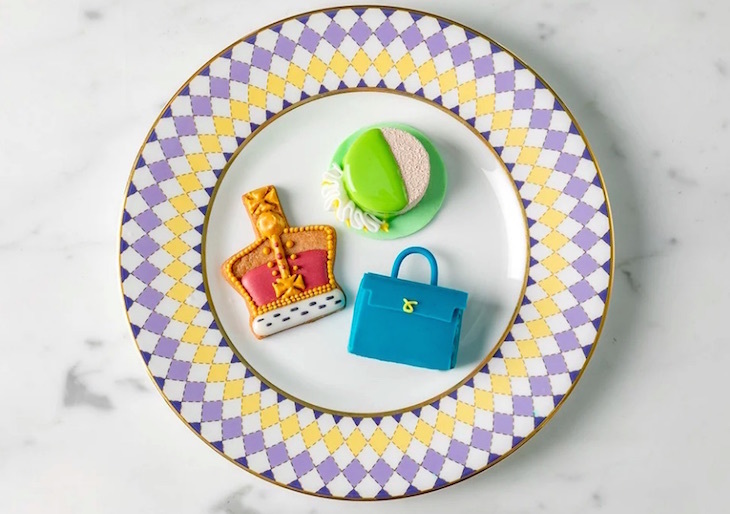 The fashion-themed menu Prêt-à-Portea at The Berkeley changes every few months to salute a different style icon — and this time, it’s all about Queen Elizabeth II.

Her hat, her handbag and, of course her crown, have been styled into edible sweet treats; a lime cheesecake, with fresh lemon compote and almond sponge; a blueberry Victoria sponge iced with mirror glaze and sandwiched with ivoire chocolate; and a vanilla biscuit iced with burgundy, red and white royal icing.

Savoury snacks including sandwiches are part of the menu too but really, we’re just here for the tiny edible wardrobe. 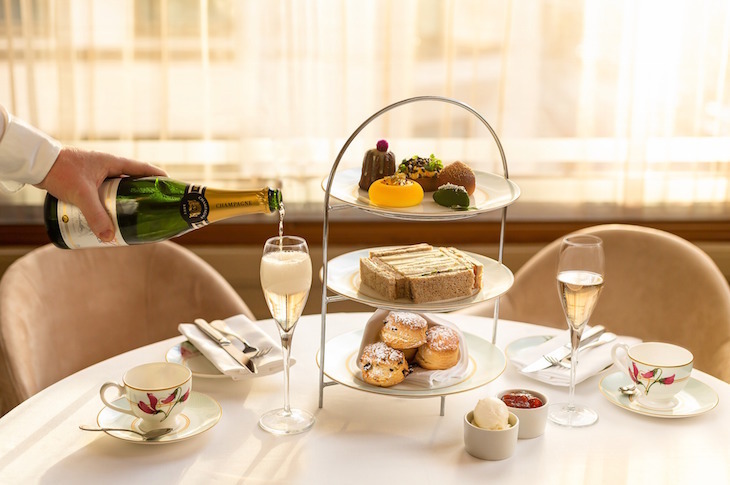 The Mayfair Lounge & Grill takes things one step further, celebrating not just 70 years of our Queen, but 70 years of her role as head of the Commonwealth, reflecting flavours from Commonwealth countries in the menu. 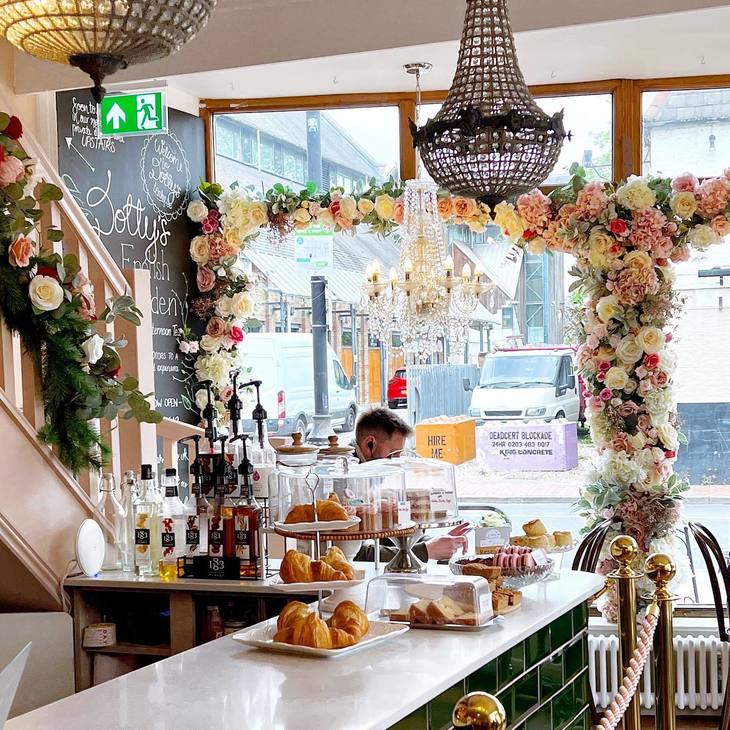 This place knows how to dress up for an occasion. Image: Dotty’s Teahouse

Vintage themed tea room Dotty’s Teahouse, located in Carshalton village, has a penchant for themed afternoon teas; Willy Wonka and Alice in Wonderland are just some of the previous incarnations.

Naturally, they’re going all out for the Jubilee, with a menu including roast beef sirloin or poached salmon sandwiches, traditional scones, and desserts such as a blackcurrant and violet Battenberg, classic Eton mess, and a rhubarb and custard tart. We expect they’ll go to town with decorating the place too — they’re good like that.

Platinum Jubilee Afternoon Tea at Dotty’s Teahouse, Carshalton. Available 9 May-3 July. £32.95 per person, of £37.95 with a glass of prosecco. They also offer local delivery and orders for collection over the Jubilee weekend, if you’re planning your own celebration.

Chameleon in Marylebone: Just a little oasis in the course of...

The adoption of COVID-19 vaccines is selecting up velocity throughout the...