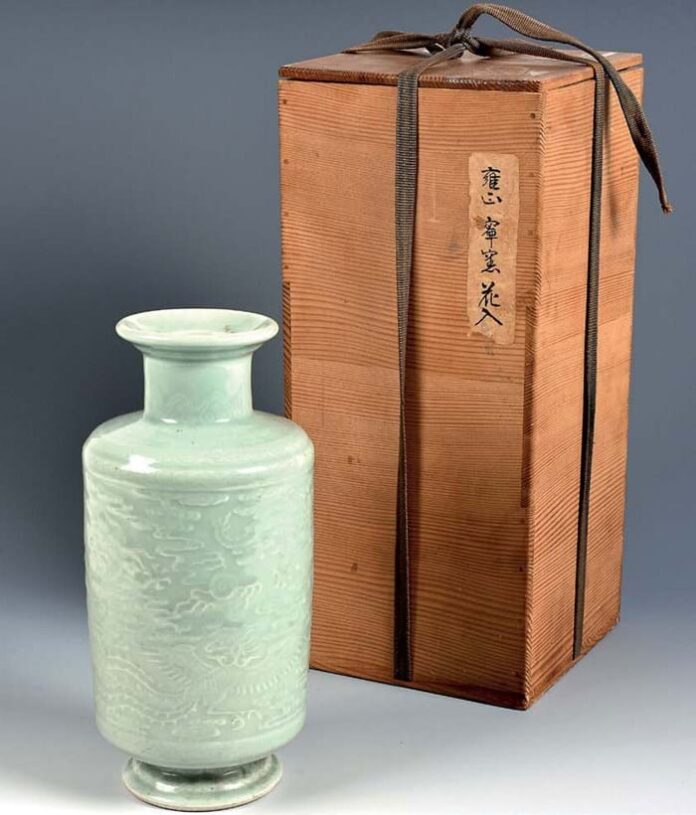 The diminutive 5in (13cm) high celadon glazed teapot, distinguished by its pear-shaped form, a delicate ‘ribbon tie’ between spout and body and an enamelled peach and pip finial, came for sale at Duke’s on November 11 from a local home where it had been for several generations.

The piece, a previously unrecorded mid-18th century form, was cautiously catalogued as ‘Qianlong (1735-96) mark and probably of the period’ but was much admired by those who viewed it both in Dorset and at a preview event in London. It had some small damage to the finial.

Estimated at £1000-2000, it sparked a 10-minute bidding contest won by a phone bidder. The hammer price (just over £1m including premium) was more than any lot had made during the London Asian art series of the previous week.

The opening 16 lots at Dreweatts in Donnington Priory came from the family of Lnt Col William Roy Hodgson (1892-1958), an Australian soldier, public servant and diplomat.

He built his collection under the advice of Prof Fujio Koyama of Tokyo National Museum while Australian minister to Japan from 1949-52. Leading Roseberys’ offering at £58,000 was an oil on board study of two horses by the Indonesian painter Lee Man Fong (1913-88), signed and dated 1949. It was among the items shortlisted for the Asian Art in London award for the most outstanding work of art from an auction house.

The sale also included a 9½in (24cm) Qianlong mark and ‘probably period’ blue and white vase copying a Ming prototype with a facetted base and elephant mask handles.

The rare form is better known in a smaller size and with Yongzheng marks. Although hampered commercially by a definite ‘lean’ sustained during firing, it took £52,000. Formerly in a private UK collection, it had been acquired by a surgeon in 1930 as a wedding gift. The ink and colour on silk album leaves, each measuring 15½ x 16in (40 x 41cm), are believed to be part of the Compendium of Birds album, a monumental natural history work depicting 360 birds and lengthy texts completed c.1721 that left the palace collection in the early 20th century.

These six works depicting chickens (symbol of fidelity and punctuality in Chinese culture) came for sale from a Scottish private collection by descent from Charles Blair (1856-1943), owner of a tea plantation in Ceylon.

They were possibly acquired by Blair while in Singapore between 1928-32.

Estimated at £5000-8000 but sold at £130,000 was an early copy of Aphorisms from the Familiar Instructions of Shengzu, the Emperor Ren, the two-volume work on the life and times of the Kangxi emperor (also known by his temple name Shengzu) edited and published in 1730 by his fourth son and heir Yongzheng.

Imperial Manchurian literature rarely appears on the market. This copy (one of just three known examples of the Yongzheng edition) has burn marks consistent with its removal from the ashes of the Yuanmingyuan (Old Summer Palace) and numerous annotations to the covers, indicating that it was treasured and well-studied upon its arrival in the West. A c.1730 copy of Shengzu Ren huangdi tingxun geyan (Aphorisms from the Familiar Instructions of Shengzu, the Emperor Ren) – £130,000 at Chiswick Auctions.

Estimated at £30,000-50,000 but sold at £180,000 by Woolley & Wallis in Salisbury on November 12 were a dozen leaves from another of the great Qing publishing projects, the Huang Chao Li Qi Tu Shi (The Illustrated Regulations for Ceremonial Paraphernalia of the Present Dynasty).

As many as 27 court painters and calligraphers worked on this mammoth project to document the codes and procedures of the Qing court.

These ink, colour and gilt on silk illustrations with explanatory text are thought to be from the original version kept in the Yuanmingyuan.

They were acquired by the father of the vendor in the 1950s directly from the family of Captain William Gordon Chalmers (1835-68) who served in the Second Opium War. Also in Salisbury, £50,000 was bid for a Qianlong red and black lacquer tea bowl carved with one of the emperor’s favourite poems, Sanqing Cha (Three Purity Tea), and dated to the bingyin year corresponding to 1746.

Another from the set, probably used at imperial tea ceremonies held during New Year celebrations, had sold for £60,000 at Sotheby’s in London six days earlier.

Like other vessels from the early Ming, the latter was directly inspired by Islamic prototypes (probably a metal or leather work canteen) and painted with characteristic ‘heaping and piling’ cobalt designs of leaf scroll, flower heads and a central raised roundel depicting an arabesque Islamic star.

The two small loop handles on the shoulder would originally have held rings while a cover was chained to the neck. Only a Yongle (1403-25) flask from the Qing court collection in the Palace Museum, Beijing, has all elements intact. A common feature to all similar pieces is a circular recess to the flat, unglazed side designed to lessen the danger of warping during firing.

A comparable example from a Swedish collection was sold for just over £1.1m at Christie’s in 2007 but went unsold when reoffered in Hong Kong in 2014 with hopes of HK$20m-30m.

Sheppard’s flask, just under 20in (50cm) high, came for sale from a Cork family who had taken it to a charity valuation day at Blarney Castle hopeful of a valuation of a few thousand euros.

The estimate had been €80,000-120,000 and – as with many of the items mentioned in this report –potential bidders had been asked to pay a substantial deposit. The buyer was from mainland China.

All prices were subject to buyer’s premium of 25% with the exception of Sheppard’s, where a 20% premium was charged.

The highest occasions, collaborations and restricted editions serve in London –...

London desires to set New York aside with an bold monetary...