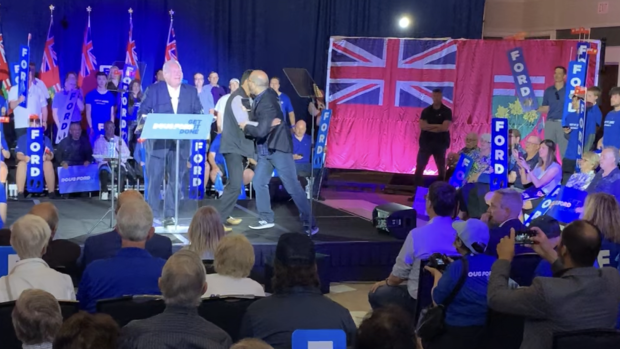 Ford was beginning to deliver his remarks at the Lamplighter Inn when a man came onstage and told the PC leader, “Mr. Ford, you’re privatizing our healthcare system. You have to be honest with Ontario.”

He was immediately escorted out of the building by security forces and booed by those present.

The man was later identified as Jeffrey Hanks. He is Co-Chair of the London Health Coalition (LHC). The group protested outside the venue with signs reading “Don’t privatize our public health service”.

Hanks told CTV News London that he stormed the stage and confronted Ford because he wanted people to know about Ford’s privatization plans.

“It was pretty scary, but you know, I’m fine,” Hanks said from the parking lot after the rally.

“I just hope more people know they’re privatizing our healthcare and they should vote accordingly.”

Another man, Humberto Ponce De Leon, then got up on stage behind Hanks, but was also quickly grabbed by security. He told CTV News London that another four years at Ford would put the province’s healthcare system in a “serious, serious situation”.

“I think I have the right to let people know before the vote that Doug Ford really is a scammer,” he said. “The Conservatives have destroyed this province and this country at the expense of the most vulnerable.”

– with files by Brent Lale of CTV News London

Warmth warning issued for Tuesday and Wednesday in London and space...