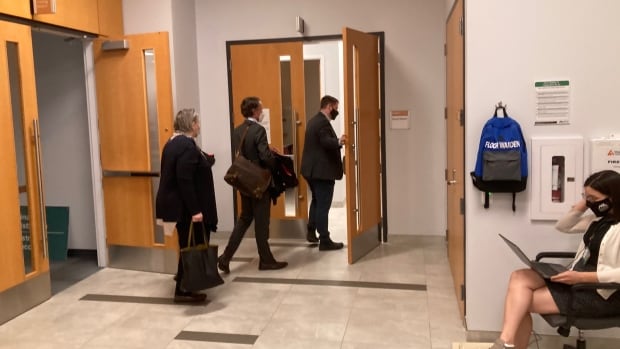 London’s medical officer of health Dr. Chris Mackie attended a confidential closed-door meeting Thursday night with the board that oversees the health unit.

It was the first time the lead physician had been seen at the Middlesex-London Health Unit’s offices since he went on leave four months ago. Reasons for his absence have not been made public, just as details of the evening’s meeting were also kept confidential.

“The board and I had a good conversation,” Mackie said as he left the nearly one hour meeting. “I look forward to discussing the contents if and when that becomes possible. Unfortunately I can’t say anything more at this time.”

Mackie would not say whether he’ll be returning to the job. Dr. Alex Summers has been filling his post as the acting medical officer of health.

Mackie was hired as medical officer of health and CEO of the health unit in 2013. In July 2020, the CEO role was taken over by someone else.

CBC News learned earlier this week that the Middlesex London Health Unit (MLHU) spent $135,000 in the last four years investigating workplace harassment or an internal toxic work environment. It is not known who was involved, as details remain confidential.

In 2020 alone, the health unit paid almost $70,000 to Schroeder Law, a London firm that focuses exclusively on workplace conflict and employs investigators and lawyers who deal with workplace harassment, violence, discrimination, bullying and human rights abuses.

Other external firms were hired by the health unit to conduct investigations in each of the last four years, the documents show.

MLHU currently has 870 employees. Before the pandemic, it had 308. Mackie led the region through the bulk of the pandemic, running a public health vaccination campaign that has seen more than 90 per cent of the population vaccinated with two doses.

The attractive London cemetery, the place a princess is buried, is...