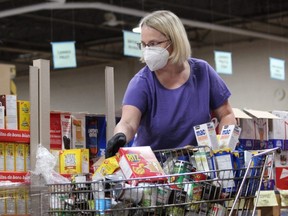 “It’s the highest level of all time. It’s been up since then, so July will be over 4,000, which we didn’t think would happen until November, December,” he said.

Just two weeks ago, Pearson had predicted that the number of families to be cared for in a month would reach 4,000 by the end of the year. The previous high, about 3,700 families per month, was reached a few years ago, he said.

“It crept up on us really quickly. And it’s on every plaque across the country,” he said.

“It’s because of the perfect storm of (of) different things. If you look at it from the food bank’s perspective, it’s primarily the rents. . . (that) has increased so much that people only have problems affording housing.”

According to tracking website Rentals.ca, the average asking rent for a two-bedroom unit available in June was $2,059. This corresponds to an increase of 28 percent compared to the previous year.

Inflation in Canada hit 8.1 percent in June, the highest year-on-year increase in 39 years, with gas and food prices being the biggest contributors.

“I think all of these things have combined in ways that we don’t fully understand as a nation to drive people to even more despair and . . . into tighter circumstances,” Pearson said.

The food bank is starting to see small business owners scrambling for emergency food because they’ve lost so much money during the pandemic and customers are yet to return, he said.

And as demand for food rises, donations have slowed from pandemic highs, Pearson said.

“We fully expected that. It’s totally fine, we understand people are paying $1,000 more for food now this year than they were last, and that’s just food, not gas or rent or anything else,” he said.

“Increasingly, for food banks, the problem is not only the growing customer base, but also the strain on the people who are donating to it at the rate they previously did. I think that’s going to be a real problem.”

Well being bosses are asking younger individuals in southwest London to...

An Indigenous dual-spirited girl recordsdata a human rights criticism towards the...