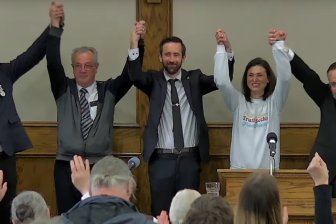 Kirsten Nagle was found guilty by the provincial court of violating Section 10(1) of the Reopening Ontario Act, which states that “a person is guilty of a criminal offense if the person hosts or organizes any public event or other gathering in a residential building.”

The indictment followed a “peaceful rally” at the Church of God in Aylmer, Ontario on April 25, 2021.

In an Instagram post, Nagle claimed the court attempted to have a trial in her absence and that she was “not just a participant, she was a leader.”

“I stand by my word I have done nothing wrong, am not guilty and have not harmed anyone,” she wrote. “Here we are in Canada, where you can get charged $10,000 to go to church.”

On September 22nd I was found guilty and fined 10,000 for attending the Church of God in Aylmer on Easter Sunday April 25th 2021.

Global News has reached out to the provincial criminal court attorney for comment but has received none at the time of publication.

Nagle concluded in her most recent statement that she would appeal the conviction and charges.

The Justice Center for Constitutional Liberties (JCCF) announced news Monday that similar charges against former Rep. Derek Sloan, former Rep. Randy Hillier, Pastor Henry Hildebrandt of the Church of God and private citizen Dan Stasko were dropped after the Krone had stated that “law enforcement was no longer in the public interest.”

Nagle, who worked in the LHSC’s neonatal intensive care unit (NICU), made headlines in January 2021 after traveling across the border, violating Canadian government guidelines enacted at the height of the pandemic to avoid unnecessary travel.

After an internal investigation, LHSC revealed to Global News that Nagle had been “terminated for cause” and said her actions “did not align with LHSC’s values.”

The London-area well being unit is briefly appointing a brand new...