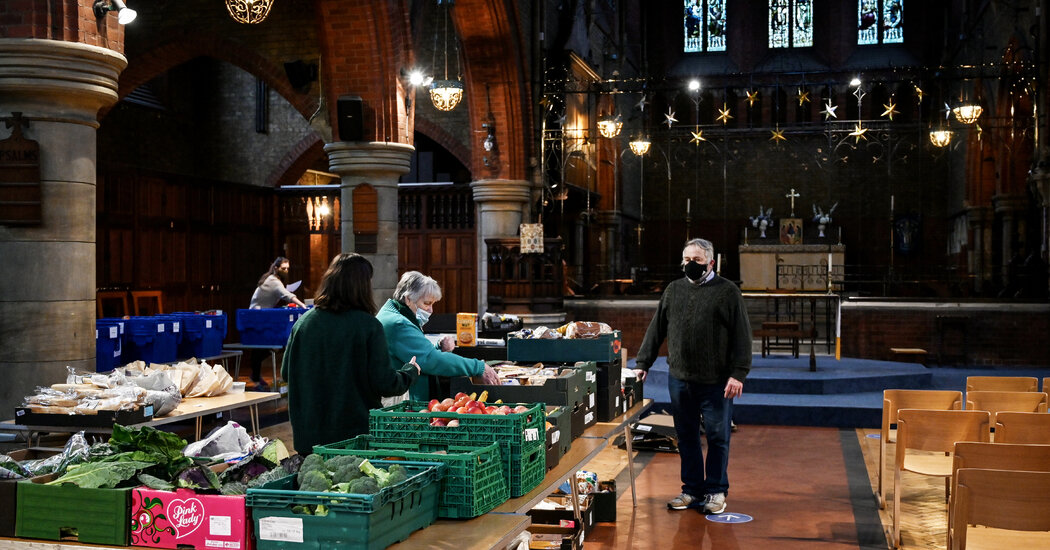 LIVERPOOL, England – For the past few weeks, Vincent Snowball has had to miss the weekly food service at a church near Liverpool city centre. But he’s still there every Tuesday, laying out fabric samples to promote his upholstery services and to connect with the people he grew up with.

Like many people across Britain, Mr Snowball, 61, has been forced to cut his already modest spending to stabilize his finances. Prices are rising at the fastest rate in three decades.

“I go to Tesco and get a shock,” he said, referring to the ubiquitous British supermarket chain. The prices there are “worrying,” he said. Instead, he shops at Aldi, the fast-growing chain that claims to be the UK’s cheapest supermarket.

Prices are soaring in the United States and across Europe, driven by rising energy costs and supply chain issues sparked by the easing of pandemic rules. But in Britain there are fears that soaring heating and electricity bills, combined with food inflation, will push millions more into poverty.

The Bank of England raised interest rates for the second time in two months on Thursday – ahead of the Federal Reserve or the European Central Bank. But policymakers recognize there is little they can do about the global factors driving inflation.

Across the country, people are turning their heating down or off, switching to cheaper supermarkets, driving less, forgoing takeaways and restaurants, and abandoning vacation plans.

Thursday brought more painful news as the government’s price cap on energy bills was raised by 54 percent, or about £700 ($953) a year, reflecting high global natural gas prices. The increase will affect 22 million households from April. A large hike in Social Security, a payroll tax that funds the National Health Service, among other things, will also go into effect that same month, further depressing net wages.

Although inflation is expected to peak at 7.25 percent in April, Bank of England economists say household finances will continue to fall: Over the next two years, household incomes after inflation and taxes will be lower than last year said the bank. This will be the third period in about a decade that real wages have contracted in the UK.

This time is “somewhat unprecedented because it stems from a very large Covid shock” and Brexit, said Arnab Bhattacharjee, an economics professor at Heriot-Watt University in Edinburgh and a researcher at the UK’s National Institute of Economic and Social Research.

Mr Snowball’s gas bill has gone up after a spike in natural gas prices in Europe late last year, so he uses it mostly for hot water. Despite living in the North West of England, he rarely turns on the heating. “I’m very careful about what I use,” he said.

But there are limits to how much Mister Snowball can take. He receives around £300 ($403) in government support towards his £550 a month rent and £213 a month in employment tax credits, financial support for those on low incomes. There is no luxury to cut.

“There are millions of people like that,” said Mr. Snowball.

Although the UK economy has slowly shaken off much of the torpor from the deep recession caused by the coronavirus, millions are not enjoying the recovery. Since the pandemic began, the number of people receiving Universal Credit, the main government income benefit, has doubled to six million. Since peaking almost 11 months ago, it has only fallen to 5.8 million. The number of people using food banks has also skyrocketed, according to the Trussell Trust, a non-profit organization that provides emergency food packages, and independent groups.

Last autumn there were warnings of a collapse in the cost of living, but “what came as a surprise this time around was the magnitude of food price inflation,” Mr Bhattacharjee said. “That hasn’t happened in the last decade.” In December alone, food and non-alcoholic beverage prices rose 1.3 percent, the fastest monthly pace since 2011.

It is impossible for more and more people to ignore them. Katie Jones’ main grocery shopping spree, which she does twice a month, used to cost up to £80; now it’s closer to £100. Ms Jones, 33, works full-time in a branch of a nationwide chain of coffee shops in Liverpool city centre. She lives with her partner and their three children across the River Mersey, where electricity bills went from £95 a month to £140 a month in December.

“We no longer have takeaways in-house,” she said. “Partly for health reasons, but I also realized how much it costs.” And there are fewer dates with her partner because she can’t get the costs out of her head.

Food inflation hurts those trying to help. Managers at Earlsfield Foodbank in south-west London recently decided to phase out items – including juices, snacks, cheese and peanut butter – because they are now too expensive. And they will provide fewer toiletries and household items like laundry detergent.

Each week, the food bank purchases a wide variety of fresh vegetables, fruits, and other groceries to supplement their donations. Material costs have risen alarmingly in recent weeks.

“This number is increasing and is not really sustainable throughout the year,” said manager Charlotte White.

As the acquisition costs grow, so does the list of people seeking help. Last week eight more people registered with Earlsfield Foodbank and 71 people received food parcels. In March 2020 there was an average of 25 guests per week, with fewer families and working people.

“Families are already at a breaking point, if not beyond,” said Ruth Patrick of the University of York and the senior researcher at Covid Realities, a national project in which about 150 low-income parents and carers documented their experiences during the pandemic . “We’re getting a really dominant message about fear and anxiety and concerns about how people are going to cope.”

Through the project, Joanne Barker-Marsh, 49, has found emotional and sometimes financial support. She lives with her 12-year-old son Harry in a two-bedroom house on the outskirts of Manchester and worries that it is too cold with high ceilings and uncarpeted floors.

“I guess I felt pretty good last year,” she said. “Now there is no buffer, there is nothing. For the first time around October last year I was like, ‘Oh my god, this doesn’t actually look that good. I have nowhere to go.’”

This month ended the government’s £20-a-week boost for recipients of Universal Credit, a pandemic-era benefit she’d received since losing her part-time cleaning job in 2020. Recently her bills from British Gas have gone up by around £20 a month to £90. She has already taken a payment holiday on her mortgage, she said.

Despite years of financial strain, Ms Barker-Marsh said she must now consider even more drastic changes. To sell her house. “I just don’t have a choice,” she said. She wants to move into something even smaller and easier to heat. “The only possession I have in the world is this house.”

With food costs rising and gasoline prices recently hitting record highs, energy bills are the number one concern for many people.

And the problem will worsen in April when the price cap rises, although the government is trying to soften the blow. The Treasury has said it will save households up to £350 off their bills in loans and tax rebates this year, about half the increase in the price cap.

A few weeks ago, Thomas Tonchev-Williams, a 33-year-old graduate student, got an unwelcome surprise. He pays a flat rate of £33.80 for gas each month, an estimated average for heating his one-bedroom flat in central London over the course of a year. It is part of an old house with high ceilings and no insulation and only half of the rooms have double glazed windows. The first two bills said he used about 16 pounds less gas than he paid for. The next bill said he was over £130. This higher fee and future fees will either increase his monthly payment or leave him in debt to his supplier.

“Although I’ve spent less time at home than at the height of Covid, my energy bills have never been this high,” Mr Tonchev-Williams said.

Now he strictly limits the heat to one hour in the morning and four in the early evening. Instead of turning it down later at night, he put a second duvet on the bed.

Some people don’t know how to cut further. At the Liverpool church, Christine Owens, 61, has already switched energy suppliers to gain access to a government-sponsored rebate scheme. But then, a few weeks ago, new supplier, EDF, started sending her letters saying her twice-monthly lump sum payment of £35 didn’t cover enough of her fuel bills – she owed £1,000.

“It’s a struggle to achieve more,” Ms Owens said of her payments.

Photographs taken by an property agent for a £500,000 backyard flat...

United Culinary and Life Past London – The Upcoming