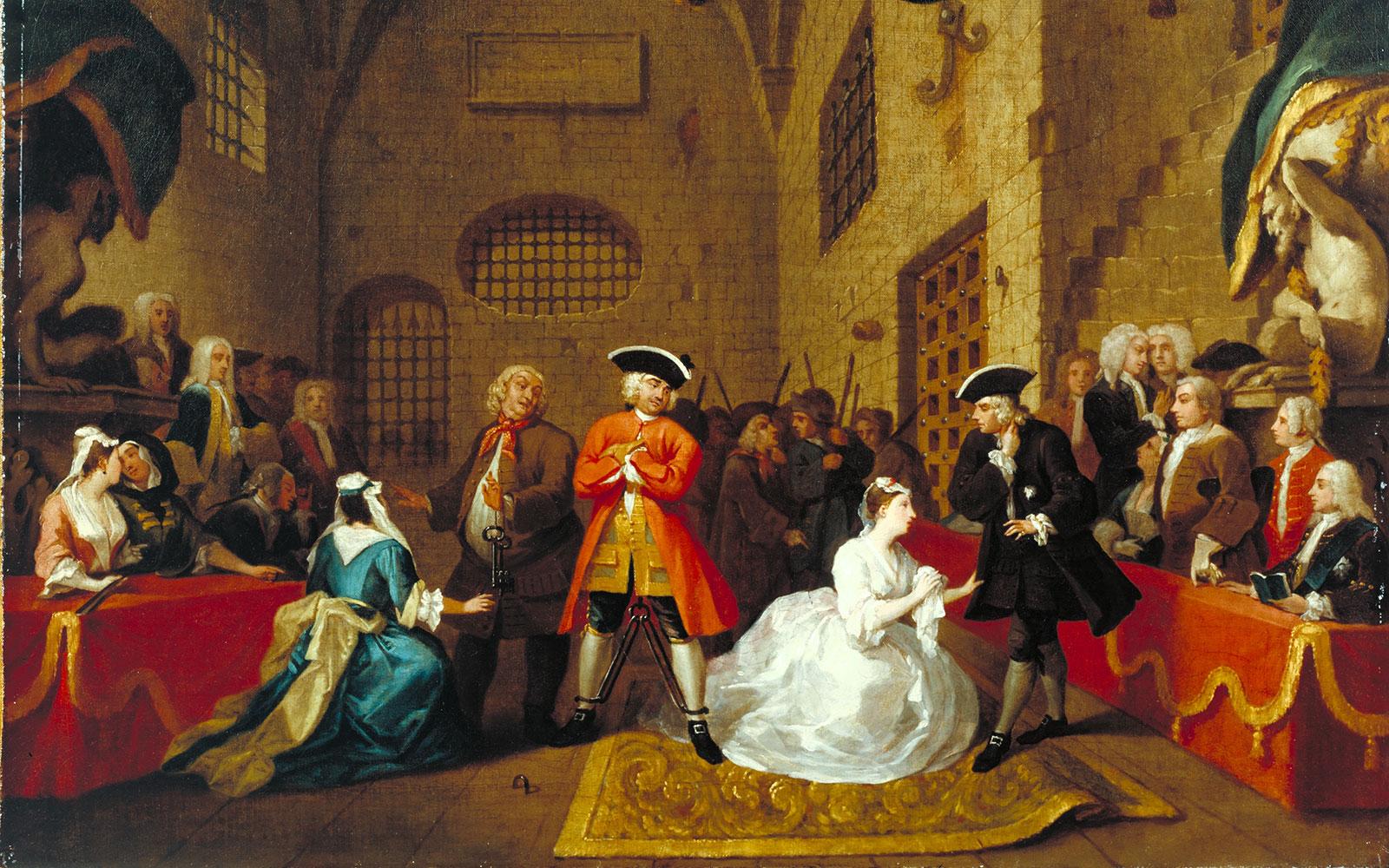 Here’s one you probably weren’t expecting: William Hogarth’s satirical — and very politically incorrect — paintings and sketches published in the TateBritain. Presented for the first time alongside his contemporaries from across Europe, they show that public caricature and satire are not limited to Little England’s punch-and-judies. It’s a promising idea, but the exhibition ends up doing something very different… and maybe a little too predictable.

Hogarth finally gets a long overdue spotlight. He is the artistic equivalent of Swift, a social critic and satirist who portrayed the rough, sexual, vulgar street life of his day: scenes that would go on to establish the term Hogarthian. Born in London in 1697 to working-class parents, he began as an engraver before becoming a renowned prankster, which gave him access to the London art scene. His work gained wide popularity throughout Europe and influenced his contemporaries before his death in 1764.

The March of the Guards to Finchley (1749-1750), William Hogarth, ©The Foundling Museum

Of all these works, none became more famous than his ironically titled Modern Moral Subjects, a series of comic strip paintings depicting tragic life in 18th-century society. While they can otherwise be viewed at the National Gallery (should you miss them), they remain the finest examples of what Hogarth is about, and are made good by the presence of his other works – many from private collections – and those of his contemporaries serves Europe. Artists such as Cornelis Troost, Chardin, Pietro Longhi, Crespi and others offer a comparison between life abroad and life here at home.

Those who love Hogarth will appreciate his blend of boyish humor and grotesque caricature. In the tradition of Pieter Brueghel, every work of art is a tableau of modern life. You can spend an hour studying the terror in Southwark Fair, the spectator’s perspective in The Gate of Calais, or the visual cues of A Rake’s Progress. There are many questions when you’re wrapped in a tornado of allegorical props. They arrive and are flung away, replaced by smaller (or larger) symbols that didn’t immediately hit the eye. You begin to question a drunken aristocrat’s line of sight. A Chinese ornament on a shelf. The spots on a prostitute’s lower lip.

One of Hogarth’s greatest joys is wondering if these props mean nothing or are the key to unlocking the painting’s narrative. The Tate’s notes guide the visitor well, pointing out areas we are likely to overlook. And even after seeing this work many, many times before, I left, still learning something new. Often the paintings are funny. But Hogarth’s work is also usually very sad; a dark, sometimes vindictive portrayal of Georgian Britain. The sex workers and fat-lipped dandies that characterize his England are all there, but so are other characters such as slaves.

The exhibition goes to great lengths to put these tragic figures in the spotlight and offer a glimpse of how they might have come to England. The sinister aristocrats become more vulgar as we spy on the chained slave children waiting for them, and free black Britons are portrayed as actors in social decline (in Four Times of Day – Noon they grope a woman and in A Rake’s Progress, image 3) .

Her important and sobering emphasis in the exhibition, as well as lectures on cultural appropriation, makes one wonder if she might not have been more aptly called “Hogarth, Europe, and Colonialism.” To be fair, it has to be said that about three quarters of the original theme is a bit thin. Enjoy dazzling works by Italian Guardi, French Chardin and Dutch master Troost. And indeed they are Europeans. But the parallels this show promises to Hogarth’s work and his juxtaposition with European artists never get deep enough. After looking at each image and reading the texts (and there are many of those), the curators have little more to say: street life throughout Europe was a little – but not entirely – like street life in England.

The show moves into the exhibition’s more obvious mission: to analyze Hogarth as a person through the eyes of today’s politics. “He might have been a conservative,” one wall text suggests apologetically, giving us the impression of a nasty chauvinist. These texts, many written and sourced by contemporary academics, some from universities in the US, deal more with “whiteness” – a modern American political term whose use here seems a bit far-fetched; saddened by the ethnic representation in 18th-century Europe (one section even lists the demographic percentages of 18th-century Paris).

Her moralizing left a sour taste in my mouth, as did her flirtation with portraying Hogarth and his contemporaries as bad people for life 250 years ago. His art has always shown it was a lousy time, as visitors to Gin Lane and A Harlot’s Progress can clearly see. We’re not stupid. You don’t have to read his paintings through Robin DiAngelo’s lens to walk into Millbank and thank your stars for not living in Georgian England.

By focusing on something else, it misses a seemingly obvious approach. One that I think would have added depth to the collection of these artists and their work, while also allowing contemporary themes to flow in: if we look at the continental struggles of Hogarth’s time and look at our own recent history, what are we a part of? together as Europeans? The show isn’t really about Troost, Chardin or Guardi. It’s not about the people either: the slums or the fat aristocrats in ruffs and powdered wigs. It’s often about today’s politics and Hogarth. 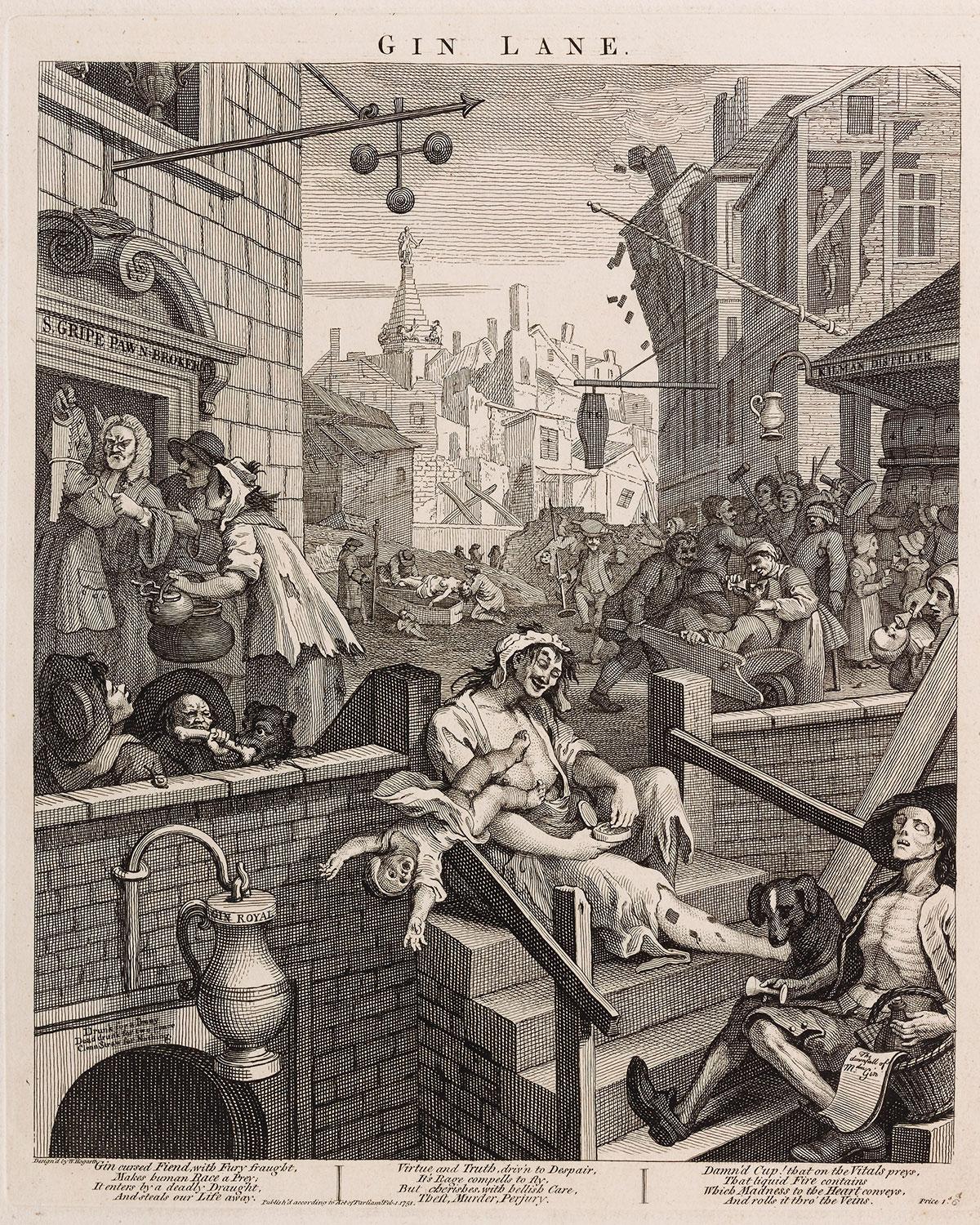 In the end, I had turned off topic, skipped the hypocritical wall texts, and just enjoyed the works for what they are: wild, silly fun. Although one section describes his style as “boy humor,” that’s an amateurish simplification. Hogarth’s humor is wide-ranging, from his wigged pug to a collection of red-faced men tumbling over a punch bowl (A Midnight Modern Conversation). Trying to make him too serious is this show’s biggest catch, and the same goes for his European friends. The masked halls in Venice’s Longhis Ridotto, with their croaking masked revelers, the snoring market vendors of Paris, and the beer houses of Amsterdam (where someone’s behind is showing the street) have as much silliness as Hogarth’s London streets.

Often that is enough. A good experience is sometimes more than the intention of the curator. So if you go (and I think you should), read the guidebook, avoid the wall texts, and focus not on how Hogarth or his European contemporaries strike us today, but on the strange clues they gave off back then left their canvases about Europeans.

Read more: Lenin, Revolution and the hunt for the Fabergé eggs

We Are Nonetheless Right here: New mural in London, Ontario. ...