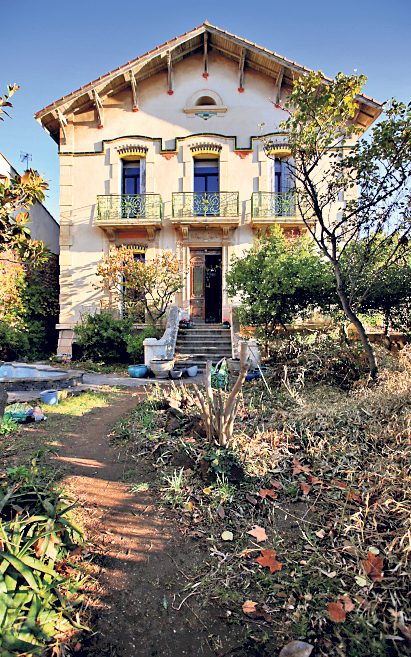 Years ago, when we used to come to this village on what some might call a holiday, which I viewed as more of a special ops mission of spying on this house, every time I walked past on the way to and from the port, I would shamelessly peer through the railings to get a better look, to take in the details, to wonder if anyone lived here.

These reconnaissance missions were hindered by the forest of scruffy, unremarkable trees and tatty bamboo which filled the front garden. One of my first projects on getting here was to clear the undergrowth. This served two purposes. Given that I’m not gifted in the fine arts of roofing, plumbing and rewiring, it gave me something physical to work on to momentarily still the internal cries of “What have we done?” And second, it allowed me to get to know the neighbours. I was not the only one with a peering-through-the-railings habit. People were kind, delighted that after so many years, someone had taken on the Sleeping Beauty house.

One morning, as I stood up to my shoulders in a heap of hacked-down bamboo, an older gentleman in a crisp, blue short-sleeved shirt stopped to say hello. What was I doing with the bamboo? Could I spare some for a project he was working on? Yes, I most certainly could. How much did he want? Did he have a van? Would he like to borrow our trailer? No, no, he explained. He would go home and measure and work out how much he needed. It turned out, he needed 50cm.

So does anyone want some bamboo? Call me. Bring a van. I also know – and have also been told by a thousand helpful, passing people – that I will have to dig out the roots or all the bamboo will come back. For this I will need a small digger and 5,000 euros. Everything seems to cost 5,000 euros, however big or small the task.

As I begin to plan the garden I realise that, like so many of life’s important endeavours, the secret to gardening is editing. Plant too many different types of flowers and shrubs and it looks bitty and uncoordinated, fill it with too many objects, and it looks like an explosion in a second-rate garden centre.

Imagine, then, my dilemma. In my fairly modest front garden, over there, to the right, by the big old stone wall and the vine, is a pool. That sounds great, doesn’t it? Especially as in the summers here the heat often climbs into the high 30s. Except – like the bamboo – my best Esther Williams impersonation in floral swimming cap and waterproof eye-makeup would be visible to any poor, passing soul. And there is another, more delicate problem. There is no getting around it. Believe me, I’ve tried. I’ve looked at it at every angle. The pool is uterus shaped.

While this may be very convenient for all of my full-moon witchcraft rituals, I generally like a little more privacy for them and besides, the candlewax and woad get everywhere. Also, the pump is broken so it fills with rainwater, when rain there is, which then can’t escape. When we arrived in September, this meant that I was, with no warning or training, the owner of the village’s most prolific mosquito breeding programme, and here we are cursed with tiger mosquitos, which don’t even have the courtesy to make a noise before ravaging your pale, uncovered flesh. The late Rosemary Verey never had to put up with this. The pool will have to go. No one can style out a uterus that takes up a quarter of their garden. That’ll be another 5,000 euros, thank you.

All of this to do before I even get to the fun part, which is the planting. This presents new challenges. In my London garden, I was obsessed with trying to get flowers to flourish in the shade. Here I have the opposite problem, with 300 days of sunshine a year. But suddenly, those delicate blooms I coaxed into life in my city garden are too easy to grow. So easy that they’re on every roundabout in such abundance that I now think they might be vulgar, common even. I’ve been thinking about buying – at further eye-watering cost – a cloud-pruned olive tree as a centrepiece for the middle bed, but now I see our vet’s office has four of them in their car park and I worry they’re the Mediterranean equivalent of privet. But into my garden notebook go my dreams: Lavender? Mimosa? Wisteria? How many citrus? Is Russian sage too much of a roundabout plant? Is it too hot for hydrangeas?

Truthfully, this is all a kind of displacement activity. More than with pictures of my old house, when photographs of our London garden pop up unexpectedly on my phone, something catches in my throat. I can’t bring myself to change the picture of it that’s the banner on my Twitter account, all thymes and rosemary tumbling on to brick paths and arches of pink Constance Spry roses.

We planted that garden from scratch over 20 years ago, and it became the backdrop to some of the happiest moments in our lives. So many Sunday mornings included weeding empty glasses from the flower beds and cigarette butts out of the gravel after another party. And I miss my plants, a lot of them gifts from friends, cuttings and slips from their own gardens. We couldn’t bring any of them with us, as since Brexit you require an expensive licence for each one, and I need every 5,000 euro I can lay my hands on at the moment. So we distributed anything in pots around north London, sometimes to the same people who gave them to us. It makes me happy to think of them flourishing in their new homes, with old friends.

Time passes quickly. Last autumn, knowing I wouldn’t be able to plant a proper garden yet, but also that life without flowers is a miserable thing, I threw a hundred or so bulbs into a dozen large pots and placed them like sentries up the steps to the front door. Now the daffodils are a foot high and the tulips poke through the soil like so may little green beaks. I know that as much as I planted them to cheer myself up, as a place marker for future possibilities, a front garden is something you also give to other people. They deserve a lot more than a uterus pool and forest of bamboo. Watch this space (through the railings).

Have you started a new life abroad? Tell us about your experience in the comments section below

Demise of girl, 2, discovered unresponsive in East London backyard after...