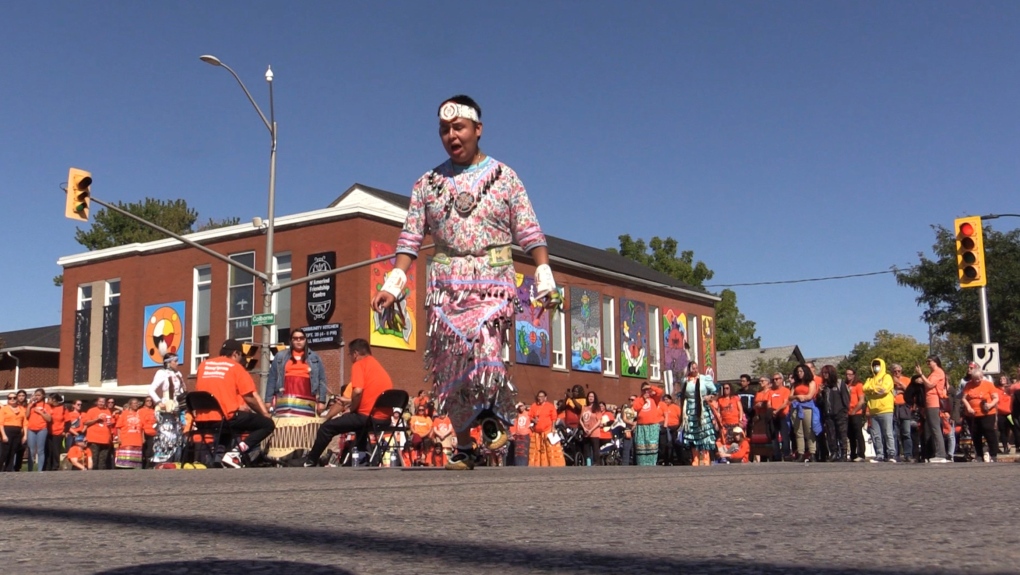 A panel of seven Indigenous murals has been unveiled in downtown London, Ontario. on the Day of Truth and Atonement.

A large crowd gathered at the corner of Colborne St. and Horton Street to see this

The mural “We are still here”.

It is a collaborative project between the City of London, the N’Amerind Friendship Center and the London Arts Council.

“I heard some stories and then I came up with the designs myself. I designed them on my iPad and then I transferred the images onto the plywood pieces and then we all painted.”

Cywink credited the people of N’Amerind with assisting in many areas, including answering questions about Haudenosaunee culture.

The project took two months as Cywink worked on the panels with youngsters Jaims and Jordain Mirasty and Sir Frederick Nicholas.

“I like knowing that I can come down the street and look up the side of the building and say, ‘I did that,'” says Nicholas, 16, a student at HB Beal Secondary School.

“I want them to understand what they mean and how much they mean to the indigenous community.”

Nicholas says it was difficult to paint the murals this summer because the air conditioning on the second floor of N’Amerind broke on many of the hot days.

“There were days when it was just so hot, but we still keep going because it means a lot,” says Nicholas, whose great-grandfather tried to escape from the residential school 13 times.

“It’s a great representation of our people that we haven’t had in a long time. Now this is becoming public for all to see and it just feels good to know that I was a part of it.”

Cywink wants those who drive or pass by to think about healing and the positive work being done to make things better.

“Many tribal peoples live with this pain and trauma 365 days a year,” says Cywink.

“I just want people to remember that it’s nice to see so many people in orange shirts that day, but people are constantly feeling this negative stuff that comes with the dorm system. There are so many people out there working to make things better for us.”

‘I went to the London backyard centre with a hidden gem...

Physique of stowaway present in London backyard after falling from Kenya...