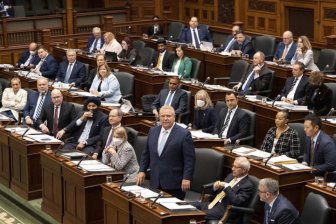 The London Health Sciences Center is urging locals to dress up in public places and says it supports the province’s latest masking advice as it grapples with an influx of patients and an occupancy rate of over 100 per cent at its hospitals.

dr Kieran Moore added Monday that a mask mandate remains on the table should the province’s healthcare system continue to face significant strain. Ontario’s Department of Health has told emergency departments to prepare for an “extreme spike” in demand.

The early start of cold and flu season has seen more people hospitalized with viruses, with pressure being felt across the organization, including in emergency rooms, intensive care units and inpatient units, LHSC said Tuesday.

This pressure is evident in LHSC’s occupancy rates, which are over 100 per cent at the University and Victoria hospitals. In the children’s hospital, the occupancy rate is 115 percent, higher than ever before, they say.

“Traditionally, February, January and March are our busiest breathing months. It’s only early November, so we’re all assuming it’s going to get worse before it gets better,” said Dr. Rod Lim, medical director of the pediatric emergency department, on Nov. 9.

London-Middlesex has reported 41 laboratory-confirmed influenza cases and two deaths since the end of August, with 27 cases and one death recorded between November 6 and 12, the Middlesex-London Health Unit says. The actual number of influenza cases is likely much higher.

At least 247 laboratory-confirmed cases of COVID-19 were reported last week along with three deaths, the health entity said, a downtrend from the previous week. However, it should be noted that most residents are not eligible for PCR testing, meaning the count is likely to be too low as well.

The head of the children’s hospital emergency room warns of an “incredibly challenging winter”.

LHSC officials say they anticipate “significant continued pressure in the coming weeks and support the government’s recommendation that individuals mask themselves in public places as we know masking is one of the most effective ways to prevent disease transmission.” .

Capacity pressure has led to long waiting times. At the children’s hospital, wait times for non-urgent and non-urgent waits averaged six to eight hours, while in the adult emergency departments, wait times reached up to 20 hours in recent weeks.

The province said Monday plans are in place to expand Ontario’s pediatric capacity to 150 percent, with planned surgeries being scaled back at most pediatric centers to accommodate capacity.

LHSC has not publicly announced any surgical cuts or cancellations. Global News was unable to obtain an interview with LHSC officials for comment this week.

Elsewhere, Children’s Hospital of Ottawa in eastern Ontario has opened a second pediatric intensive care unit, while Toronto’s Sick Kids Hospital has canceled non-urgent surgeries and is directing children as young as 14 to adult intensive care units when they need critical care.

The LHSC, like other hospitals in the province, is also struggling with staffing shortages as healthcare professionals quit their jobs, take early retirement, or are absent due to illness.

Others have moved elsewhere, including to the United States, in part because of the province’s controversial wage cap law, Bill 124.

Local hospital officials have advised the public to use alternative healthcare options unless it is an emergency, including the emergency clinic, outpatient clinics and family doctors.

— With files from The Canadian Press and Andrew Graham, Isaac Callan and Colin D’Mello from Global News.

Overview of the Mayor of London’s Well being Inequalities Take a...

Which London artwork venues will obtain a £ 275 million share...

London well being official urges EVERYONE in Lambeth and Wandsworth to...