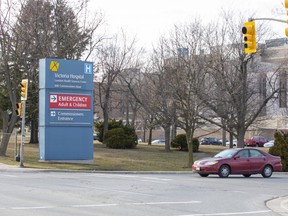 London Health Sciences Centre has appointed three new presidents and three other top-ranking executives, the latest move in a major shakeup of the hospital’s highest ranks.

Deborah Wiseman, the chief nursing executive at the Huron Perth Health Care Alliance, will become president of Victoria Hospital in the fall.

“While we are one team unified around our common mission, University, Victoria and Children’s hospitals each have a unique identity with individual strengths and opportunities,” the hospital said in a statement Tuesday.

“Each president will work collaboratively with staff and executive and physician leaders to strengthen our mission of care, teaching and research.”

While the Victoria and University presidents are new positions, the role at Children’s Hospital is not. Jackie Schleifer Taylor served as its president before becoming LHSC president and chief executive after Paul Woods was fired in January 2021 amid revelations he had travelled internationally during the pandemic.

All three will join LHSC in September, the memos said.

Tuesday’s announcements are the latest churn in LHSC’s top ranks in the last 18 months.

At the time, LHSC said it was aggressively restructuring its top ranks to be smaller, tighter and more responsive to challenges coming out of the emergency phase of the COVID-19 pandemic.

Five other LHSC executives left or were terminated in the first six months of 2021, including Woods, the chief operating officer and the general counsel.

The five received a combined $1.48 million in salary and about $49,000 in benefits in 2021, provincial public sector salary disclosures show, despite parting ways with LHSC in the first half of the year.