There are signs of life in the City of London.

Brokers and dealers visit a newly opened Pret a Manger takeaway which is only available for takeout. Gardeners prepare flower beds around the statue of the Duke of Wellington overlooking the Bank tube station in the heart of the borough. Cleaning teams rub door handles and polish floors in bank lobbies. The smell of disinfectant wafts down the street. It smells like progress.

For the past 11 weeks, the European financial center has been manned by skeleton crews, especially at the high-speed trading counters that are difficult to operate from home. With UK schools slated to open next week and non-essential stores to follow on June 15th, the Square Mile is ready to go back into service.

A city worker cleans the street outside the Bank of England in the City of London.

The hope is that soon the city will no longer look like an unused movie set, but more like the busy locale that has long drawn gogetters from around the world. Moving the financial industry from the home office to its glass and steel towers is vital to the health of the UK. The money business accounts for about 7% of the country’s economic output, and before the world economy stalled it had an annual trade surplus of £ 44 billion ($ 55 billion).

However, bringing people back is much more complicated than setting it up from your home. For example, HSBC Holdings Plc and UBS Group AG do not plan to ask most employees to return for the foreseeable future. also for the asset management business of Deutsche Bank AG in London. According to a survey by YouGov earlier this month for Okta Inc., a software company, only one in four office workers wants to be back full time.

At the beginning of the next phase of the crisis, the leading companies in the financial sector are faced with sensitive questions far beyond their quantitative comfort zone of balance sheets and price-earnings ratios. Dean Proctor, CEO of Seven Investment Management LLP, says he plans to bring 10% to 25% of his 225 London workforce back in early June.

“We need to move people from thinking about survival to thinking about how we will thrive in this time,” says Proctor, whose company manages £ 14 billion in assets. “We also need to understand how our employees are positioned: who do they live with? Are there family members who are at high risk or at risk? Do you use public transport to get to work? Is it worth it? That is the dilemma. “

How Citigroup plans to bring its employees back

The first wave of returnees are likely to be traders, merger and acquisition bankers, and other professionals who are subject to strict legal compliance and confidentiality requirements. You will find a radically changed environment. The Royal Bank of Scotland Group Plc will guide employees through thermal imaging and temperature checks at the entrances to their offices near Liverpool Street Station. High-rise office workers can expect similar measures, from restricted access to elevators and kitchens to marked social distance limits on the floors to one-way stairs. Most companies distribute face masks and other protective equipment to employees.

The new world has already been imposed elsewhere. At UniCredit SpA in Milan, employees must wear masks at all times. In Frankfurt, Deutsche Bank has switched off coffee machines so that people don’t press the buttons. An industry that relies on regular team meetings and chance encounters must adapt to a more regulated reality. And jam in conference rooms for brainstorming sessions? Under no circumstance. You’re still better off using Zoom even when you’re all in the office. 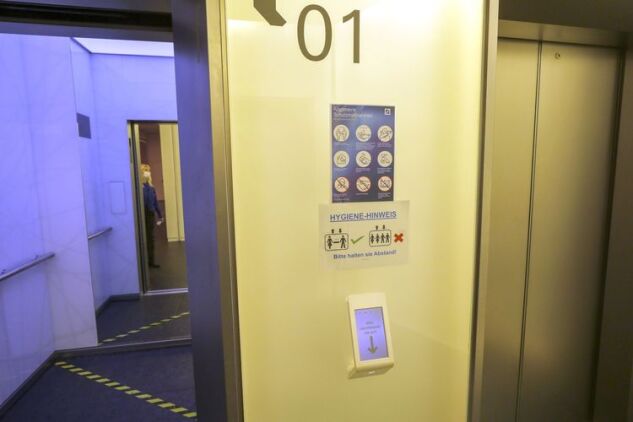 A hygiene information poster is located near a socially distant floor marking in an elevator in the Frankfurt headquarters of Deutsche Bank.

Some CFOs wonder if all office space is worth it. In late April, Jes Staley, CEO of Barclays Plc, told reporters that “the idea of ​​bringing 7,000 people into one building could be a thing of the past”.

As tempting as it may be to throw away expensive overheads, it’s a bad idea, say experts, who range from senior managers to workplace psychologists. Michael Thomas, a partner in the financial services practice at global law firm Hogan Lovells, says it is important to get back to the office and resume face-to-face meetings.

Bosses shouldn’t underestimate the toll of isolation. The novelty of working from home can lead to burnout from overwork or a sense of futility and exclusion for employees who do not receive feedback from supervisors, says Octavius ​​Black, CEO of Mind Gym Plc, a London-based consulting firm for behavioral research.

According to Black, people need the banter and daily contact with colleagues to encourage creativity and pursue innovative projects. Not only is this vital to maintaining a resilient corporate culture, but it also drives companies to become more profitable.

“The idea of ​​saving office space and letting people work from home indefinitely would be a massive misstep,” says Black. “All of these rituals at work are important; they provide context, a sense of belonging, they are the social glue in an organization.”

Working outside the office will also change. Power lunches don’t feel that special when you and your fellow guests are wearing masks and sitting at opposite ends of a table. Forget those impromptu pints of beer at the end of a busy week. They likely need to be booked well in advance, at least when the pubs reopen.

The lockdown was especially challenging for women, say Debbie Wosskow and Anna Jones, co-founders of the AllBright Club, a women-only organization that had to temporarily close its two locations in London and one in West Hollywood, California. Many of its members have sought to balance “double shifts” from overcrowded workloads and home school children. Those with less enlightened spouses were also inundated with housework. 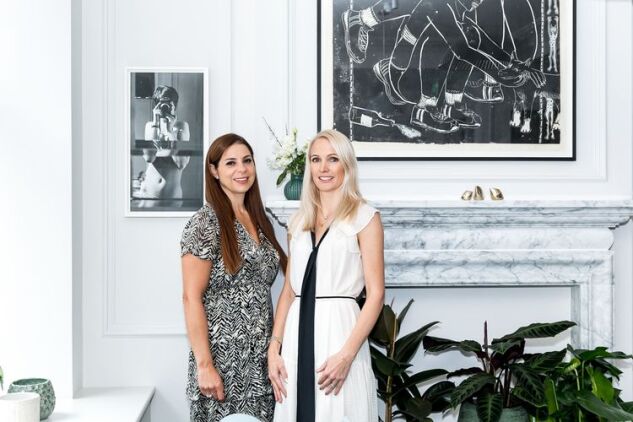 But Wosskow and Jones, who both suffered from Covid-19 themselves, say the crisis has given their company a new urgency. They hastened the rollout of their AllBright Digital program, which uses video chat and streaming to replicate the network members, mentoring, and career support that the clubs used to receive. They also believe that the clubhouses, which feature rooftop modernist cuisine and cocktails, as well as business premises, are becoming havens for members who either can’t or won’t return to their offices. Most importantly, Wosskow and Jones are taking advantage of the opportunity to be at the center of a community as they prepare for a possible reopening in July.

“This was a tremendous opportunity to create a global sisterhood that is needed now more than ever,” Wosskow said on a Zoom chat.

Even as companies adjust to this strange new world, there is little doubt that the next phase of this crisis will be difficult. The unprecedented disruption will force companies to revisit headcount, commercial property rentals, technology, and even their business models. Hanging on top of anything is the possibility – some would say the likelihood – of subsequent waves of the virus as scientists race to make a vaccine.

Yet amid fear, there is reason to believe that the City of London, founded by the Romans nearly 2,000 years ago and weathered the Black Death, Great Fire and Lightning over the centuries, will withstand the coronavirus . There will be change on this square mile of medieval streets and Victorian merchant houses with postmodern skyscrapers. As fewer workers could be employed for some time, many of the hundreds of restaurants, dry goods stores, pubs, and dry cleaners that depend on their sponsorship could close for good. 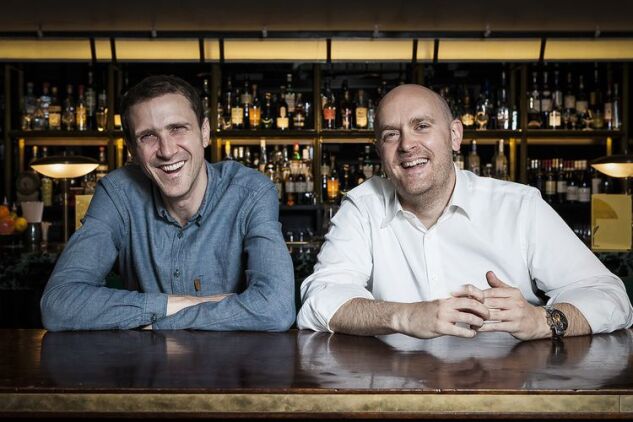 Huw Gott, left, and Hawksmoor co-founder Will Beckett before the lockdown

Other changes might be welcome though – more commuters are expected to cycle to work than ever before, which could result in the permanent closure of some roads to motor vehicles. And the forced, mass experimentation of working from home can accelerate the adoption of a healthier work-life balance in an industry known for its demanding work hours.

One thing that won’t change is the desire to be the center of action. That’s the ace card in town, says Will Beckett, co-founder of the Hawksmoor chain of high-end steakhouses. For the past 14 years he has watched financial types celebrate business over their ribs and make permanent new connections in his dining rooms.

“There’s a reason we live in cities, we want that spontaneity, that sense of improvisation, and are we just going to let it go?” Asks Beckett. “No, I do not think so. We are social animals. We’ll come back to that. The problem is we just don’t know how long it will take. “

– With the support of Silla Brush, Sonia Sirletti and Steven Arons.

To contact the editors responsible for this story:
Pierre Paulden at [email protected]

London arts venues closed as a consequence of Queen’s loss of...