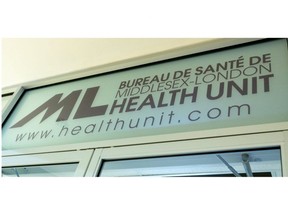 The London-area health unit has named a new second-in-command to start next month, but it will be only a temporary position.

The London-area health unit has named a new second-in-command to start next month, but it will be only a temporary position.

“Dr. Dueck knows the Middlesex-London region, which is great. We’re really delighted that she’s joining the team,” medical officer of health Alex Summers said Tuesday. “She’s an excellent public health physician. . . . She’s also a very kind and caring person who will be a tremendous leader for our organization as we continue to try to work past the pandemic.”

Before medical school, Dueck completed her undergraduate studies at Western University. Summers met Dueck when they were classmates at the University of Toronto.

The appointment, which Summers said will put the health unit in a strong position heading into the fall respiratory virus season, is the result of months of recruitment by the health unit through formal channels and informal public health networking.

It is too early to tell whether Dueck will become the permanent associate medical officer of health, Summers said.

“Our ongoing recruitment for a permanent associate medical officer of health will continue through the fall and into the winter,” he said. “We’ll continue to look. The reality is after 2½ years of pandemic work, many public health physicians are occupied and doing good things across the country.”

We apologize, but this video has failed to load.

The health unit has been without a second-in-command since November, when Summers took over for medical officer of health Chris Mackie when he went on a leave of absence.

Mackie, a high-profile voice in London’s pandemic response, went on leave amid allegations of a toxic work environment at the health unit. He resigned his post in March.

Days later, Summers was named the next medical officer of health.

NDP MPPs get an earful on native healthcare – CTV Information...