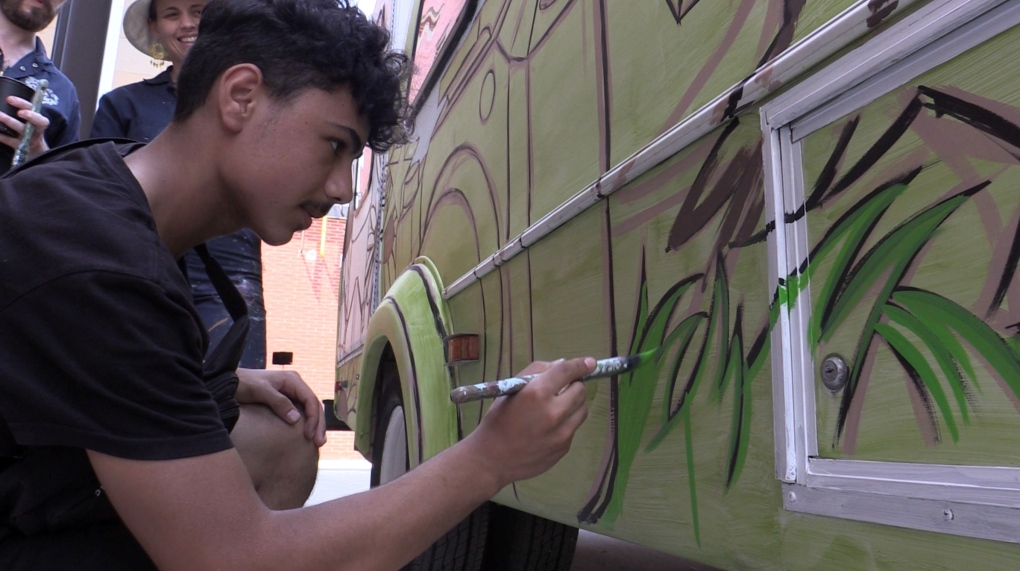 A joint project that was three years in the making is finally being realized.

High school students from the Thames Valley District School Board (TVDSB), the Boys and Girls Club and artists from the London Arts Council work together to paint a bus.

“Every single student had an idea and a template to think about what they wanted to see,” said Laura Briscoe, TVDSB Innovation Coordinator. “Then they collaborated to share that with the artists.”

The Bus is a traveling audio-video (A/V) center affiliated with the Digital Creative Arts Center (DCAC) at Boys and Girls Club. It will tour the City of London this summer for pop-up concerts once the painting is complete and the bus has been converted into an A/V centre.

“We’re going to go to Boullee Street, Marconi, to these community housing projects across the city,” said Mario Circelli, manager of the DCAC.

“This will be our third year, but this is the first year we’ve come up with the Creativity and Movement Bus. It’s going to be great to see the faces of some of these kids when we show up and this bus is painted and decorated as it is and then a band comes out and sets up and starts performing,” he added.

“This was an opportunity to amplify the voices of students, especially students learning English,” said Briscoe.

“They are newcomers to Canada and we really want them to feel that their ideas matter. They shine and the opportunity for some of them to see and work with professional artists has been so exciting,” she added.

Later this week the bus will be at Beal Secondary where another group of students will be painting.

The concert series begins in July.

The very best eating places in London open in Spring 2022

Grayson Perry’s Tomb of the Unknown Craftsman returns to his “religious...