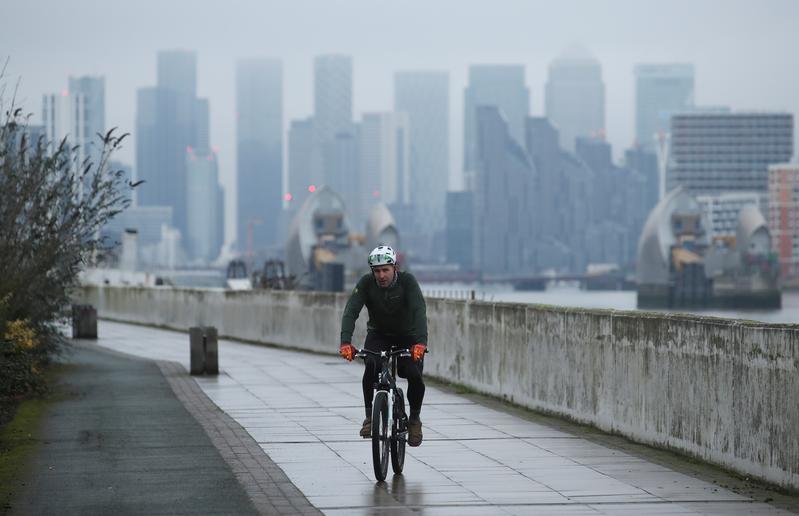 LONDON (Reuters) – The City of London’s financial industry would be worse off than rival New York under an early draft financial services cooperation agreement between Britain and the European Union, a document seen by Reuters showed.

FILE PHOTO: Buildings are seen in the business district of Canary Wharf as a man drives down a path amid the outbreak of the coronavirus disease (COVID-19) in London, Britain January 27, 2021. REUTERS/Peter Cziborra/File Photo

The UK financial services industry has been largely cut off from the EU, its biggest customer, since the end of a Brexit transition period on December 31, as the sector is not covered by the UK-EU trade deal.

Trading in EU stocks and derivatives, for example, has already left the UK for continental Europe.

Both sides commit to agreeing a memorandum of understanding (MoU) by the end of March for regular, informal discussions on financial rules and market surveillance.

An early draft of that document seen by Reuters has less substance than a deal the EU struck with the United States in 2016, industry officials said.

“This is the start of a negotiation – the text proposed by the Commission is significantly more limited than the UK’s ambitions,” said Chris Bates, financial services lawyer at Clifford Chance.

Brussels can grant foreign financial firms direct market access if it believes their home market rules are as robust as the EU’s own standards, a system known as “equivalence”.

A person familiar with the UK negotiating position said the UK is focused on ensuring the MoU provides transparency and proper dialogue when it comes to adopting, suspending and withdrawing equivalence decisions.

Currently, the EU can theoretically revoke equivalence decisions with a notice period of just 30 days.

Under the US agreement with the EU, equivalence is treated as “outcomes-based”.

The UK has called for EU equivalence to also be results-based, which would ensure focus would be on whether UK and EU financial rules produce the same results.

However, no outcome-based equivalence is mentioned in the draft memorandum between the EU and the UK.

The EU text is intentionally less ambitious than the US deal and doesn’t even reflect the current depth of ties to bilateral memoranda of understanding already signed between individual regulators in the UK and EU, a financial sector source said.

But industry officials also said that even the draft document now in circulation would be a start in restoring trust between the two sides.

“It is important to create a framework for regulatory dialogue, even if there is little expectation of any movement on new equivalence decisions in the near future,” Bates said.

The financial industry wants the UK to include a provision for industry consultations as part of the regulatory dialogue, the first source said.

“The MoU is on the lighter side of what the city wants,” said a second financial sector source, adding that it could make little difference as the UK is likely to receive limited equivalence.

Brussels has already made it clear that even an agreed MoU will not automatically result in more EU access for London’s financial industry beyond the temporary permission to clear EU derivatives deals.

The EU executive is meeting with banks on Friday to ask how they can justify continuing derivatives clearing in London.

Bank of England Governor Andrew Bailey said this week Britain will resist any attempts by the EU to get banks to move trillions of euros in derivatives clearing from the UK to the bloc.

The precise boundary between London and Kent and Slough Tier Three...

London-based hedge fund Winton is in search of crypto bonds