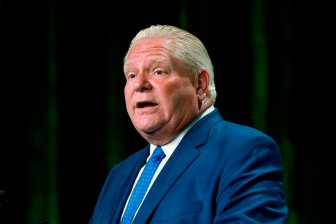 Jane Berges, a widow from London, Ontario, opposes Bill 7 and doesn’t want other families to be left without a choice.

Berges’ late husband Don Wilson, 83, died in April after being “forcibly transferred” from the London Health Sciences Center (LHSC) to a care home while undergoing treatment amid a COVID-19 outbreak, she said.

“I blame myself for this and I always will,” Berges told Global News.

While patients will not be charged an uninsured rate of $1,800 per day, those who refuse to transfer to long-term care are expected to pay a fee, but the amount is unknown.

2:25
Ontario patients could face hospital charges if they refuse to transfer to long-term care

Ontario patients could face hospital charges if they refuse to transfer to long-term care – August 24, 2022

Premier Doug Ford said the legislation aims to ease the burden on hospitals and provide adequate care to these patients.

“I understand the impulse to use nursing homes, but we know the problems that are endemic to them,” Berges said. “Our most vulnerable will be sent to care homes that no one would choose if it were their choice and those care homes will be filled to the brim.

“For heaven’s sake, they sent people there in February.”

She alleges that after being transferred from the LHSC with “little consultation”, her husband later fell and fractured his hip at the understaffed facility, which she said was “riddled with neglect”.

“There were 30 beds, eight of them had COVID, and there were two Personal Caregivers (PSW),” she recalled. “Nobody was there at the weekend [and] Don immediately started going downhill because no one gave him his medication on time.

“This is supposedly a rehab space, and you couldn’t have rehab in the hall because everyone was in the rooms,” she said. “One of the PSWs told me she wanted to quit unless someone else showed up.”

Wilson was being treated for a urinary tract infection he developed at the facility while living with a pre-existing case of nonalcoholic fatty liver disease. He was later hospitalized again, where he died on April 15.

Global News has reached out to LHSC for comment.

“When Don’s wife, Jane Berges, heard about Bill 7, she contacted me to share her story,” Sattler said. “Jane and Don were told by the hospital that Don was being transferred to long-term care and were not given time to discuss or consider other options.

“Jane continues to live with the guilt of not saying no, but she was overwhelmed and felt she had no choice – this was before the new powers under Bill 7 to admit patients into long-term care without their consent,” she continued. “No family should have to go through that.”

2:20
The Ford government has been accused of pushing through health care changes in Ontario

1st case of monkeypox in Middlesex-London has been recognized – CBC.ca