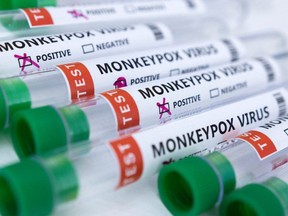 Public health officials have identified the first case of monkeypox in the London area but say the risk to the wider population remains very low.

Public health officials have identified the first case of monkeypox in the London area but say the risk to the wider population remains very low.

The infected person, identified by a local healthcare provider, has no close contacts who require post-exposure treatment for the viral disease or follow-up care by case investigators, the Middlesex-London Health Unit said on Monday.

The patient, whose age and gender were not specified, is doing well, the health department said.

“We could not specifically link this case to another case in Canada. However, we believe it was related to travel at the time and not a transmission here in the Middlesex-London area,” said Health Officer Alex Summers.

“Right now there is no risk for the vast majority of people here.”

The health department has been sharing information about monkeypox, a viral disease endemic to parts of central and west Africa, with local health providers since Canada’s first cases were reported on May 19.

The case came to the attention of the health unit after asking health care providers to notify them if a patient showed signs and symptoms of the virus, including fever, headache, lethargy and a pronounced rash, Summers said Monday.

While the prevalence of monkeypox shouldn’t be ignored or underestimated, the West African strain, which is popping up in the U.S., Europe and Canada, is much less deadly than the Central African variant, said Sameer Elsayed, an infectious disease physician and professor of medicine, pathology and laboratory science Medicine at Western University.

And on average, monkeypox is nowhere near as contagious as the Omicron strain of the virus that causes COVID-19.

After two years of grappling with the COVID pandemic, the public is understandably concerned or overly vigilant about emerging viral threats, he said. But it’s not clear that monkeypox has the right properties to make it the next pandemic virus.

“Within certain populations or maybe high-risk exposures, it’s possible to sustain it in a small group,” he said. “But at the population level, this is unlikely to happen.”

There is no specific treatment for monkeypox, but antiviral drugs used to treat smallpox — and post-exposure vaccination against the disease — can help.

The first-generation smallpox vaccine — before the disease was declared eradicated in 1980 — provided about 85 percent cross-protection against monkeypox, Elsayed said.

Depending on the trajectory of monkeypox in North America, a newer smallpox vaccine could be offered to healthcare providers who deal directly with monkeypox patients or lab workers as a precaution before exposure, he said, but a widespread public vaccination campaign seems less likely.

“We have to be very careful there. . . diverting too many health resources into something that won’t result in a major public health problem,” Elsayed said. “We have to have a good balance.”

Should a similar need for vaccinations arise in London, the health unit could mobilize quickly, Summers said.

“We would quickly be able to put these clinics into operation. I would imagine that we would use our current COVID-19 vaccine operations and infrastructure to deliver vaccines either through mobile clinics or . . . Mass vaccination sites,” he said.

“I don’t know if we’ve ever been as able to rapidly deploy a post-exposure prophylaxis clinic as we are now.”

Postmedia strives to maintain a lively but civilized discussion forum and encourages all readers to share their opinions on our articles. Comments may take up to an hour to be moderated before they appear on the site. We ask that you keep your comments relevant and respectful. We’ve turned on email notifications – you’ll now receive an email when you get a reply to your comment, there’s an update on a comment thread you follow, or when a user you follow comments follows. For more information and details on how to customize your email settings, see our Community Guidelines.

‘London finance world remains to be every thing about your old...

London banks are making their option to Frankfurt earlier than Brexit

One COVID dying and 73 new circumstances in Middlesex-London