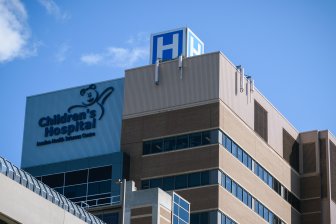 A recent $2 million donation to support the London Health Sciences Center’s (LHSC) hematology program will go a long way in strengthening research and care for people with blood-related diseases and cancer, officials say.

The donation was made anonymously to the London Health Sciences Foundation (LHSF) by a member of the public, they said, inspired by the experience of a family member who has been diagnosed with multiple myeloma, a type of cancer in which abnormal plasma cells can form tumors in the bones and the bone marrow.

LHSC and LHSF officials announced the donation during a virtual call Wednesday morning.

“Today’s gift announcement is not only monumental for the London Health Sciences Centre’s hematology programme, it is also monumental for patients living with myeloma as this disease entity has never before received the level of funding we are announcing here today,” said John MacFarlane, President and CEO of LHSF.

The funds, he said, would have far-reaching and life-changing implications for patients with myeloma and, ideally, would improve patient outcomes in the future.

The money will be used to fund the purchase of a mass spectrometer, a device that detects proteins in the blood and allows treatment adjustments based on blood biomarkers, officials said. It is also used to hire a clinical research coordinator who will work alongside Dr. Chai Phua, a hematologist at Victoria Hospital, will assist with medical studies and projects.

Finally, the funding will be used to hire a physician assistant to lead a pilot study evaluating the efficacy, feasibility, and safety of an “intermediate-care model in patients who are in the survivorship range of hematological malignancies,” according to an LHSF publication.

London, Ont. The children’s hospital is canceling operations due to the increasing number of patients

In a statement issued by LHSF, the anonymous donor admitted his family was “generally unaware” of issues surrounding multiple myeloma before his family member was diagnosed.

The donor said he contacted Dr. Phua to see “how we can help advance multiple myeloma research in a meaningful way.”

“The medical team – Phua, (Matthew) Nichols and (Vipin) Bhayana, along with Pamela Taylor, came up with an impressive donor proposal to fund a new piece of technology that would significantly advance the detection of cancer in blood samples and also fund the cost of additional research and patient care staff,” read the donor’s statement, which was read by MacFarlane.

“The topic of technology resonated with us because technology has been a key focus of our business endeavors and we have seen firsthand the power of technology to transform a company’s effectiveness.”

About 10 Canadians are diagnosed with multiple myeloma every day, and while there is currently no cure, treatments have improved significantly, said Dr. Ian Chin-Yee, LHSC Laboratory Medicine Program Manager.

Myeloma is the second fastest growing cancer in the country, after melanoma, he noted.

“As treatments have gotten better, we’ve been able to get deeper and better responses, and with these developments, we needed better tools to monitor the cancer.”

“That’s why this generous gift is so important to us, because with this mass spectrometer we can measure the patient’s disease at an unprecedented level.”

According to LHSC officials, there are approximately 200 to 300 active myeloma patients who are tested with the spectrometer to determine their minimal residual disease, or MRD — the small number of cancer cells that remain in the body after treatment.

Currently, MRD is obtained from a bone marrow sample, while the new spectrometer will be able to detect MRD with a simple blood draw, says Dr. phua.

LHSC officials said up to 500 patients with myeloma and other hematologic cancers could benefit from the device, which will be stationed at Victoria Hospital.

“To the best of our knowledge, LHSC would be the first clinical hospital laboratory attempting to measure m-protein testing by high-resolution mass spectrometry in Canada,” they said.

— With files from The Canadian Press

London councilors say no to reintroducing a masks mandate