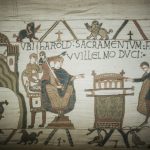 To receive Morning Links in your inbox every weekday, sign up for our Breakfast with ARTnews newsletter.

COLIN FORBES, a founder of the storied design firm Pentagram, died on Sunday at the age of 94, the New York Times reports. With four others, Forbes established Pentagram in 1972 in London, with the aim of making “something in between a boutique firm and a large Madison Avenue-type concern,” journalist Neil Genzlinger writes. Fifty years later, it now has 23 partners, more than 200 employees, and offices in New York, Berlin, and Austin, Texas. Forbes, who retired from the company in 1993, served as president of the American Institute of Graphic Arts and won its AIGA medal. Among his many design credits, the firm said, was the creation of a logo that the Japanese carmaker Nissan long used, corporate identities for Neiman Marcus and British Petroleum, and a “poster advocating free admission to London museums that was a petition he signed with famous artists signatures.”

ARTS AWARDS. The Wallace Foundation has selected 18 arts organizations of color in the United States that it will support with up to $3.75 million each over the next five years, the New York Times reports. The groups include the Laundromat Project in Brooklyn, the Union for Contemporary Art in Omaha, Nebraska, and the Arab American National Museum in Dearborn, Michigan. “It’s about: What are the aspirations for their future?” Bahia Ramos, the foundation’s director of arts, told the paper. Meanwhile, the Iranian artist Azin Zolfaghari was named the 2022 winner of the Sovereign Art Foundation’s Sovereign Asian Art Prize, which comes with $30,000, Ocula reports, and Jae-min Cha has won the third Artspectrum Award from the Leeum Museum in Seoul.

Two people tried to make off with a print of a Jean-Michel Basquiat work from Taglialatella Galleries in New York’s Chelsea neighborhood last weekend but were stopped by an employee. Police said they are investigating. The pair did abscond with a mostly empty bottle of whiskey. [Hyperallergic]

An NFT of a digital pair of Nike sneakers designed by artist Takashi Murakami has traded for $134,000. The shoes were released last month as part of a collection of 20,000 NFTs from the shoe giant. Naturally, that series is called Cryptokicks. [The New York Times]

Artist and musician Bob Dylan has made a new recording of his 1962 classic “Blowin’ in the Wind,” and a single recording of it will be offered at Christie’s in London in July with a top estimate of £1 million ($1.26 million). Audiophiles take note—it is being released on a special analog disc developed by producer T Bone Burnett. [The Guardian]

The Victoria and Albert Museum in London will stage the first retrospective ever devoted to fashion designer Gabrielle “Coco” Chanel in the United Kingdom. Featuring some 180 designs, it will open in September. [The Guardian]

While the fabled Nakagin Capsule Tower in Tokyo, a landmark of Japanese modernism, is being demolished, parts of it will live on. Some of the 140 capsules that comprise the building are going to museums. [Associated Press/Bloomberg]

A study of the DNA of a man who was killed by the volcanic eruption that buried Pompeii in 79 revealed that he was descended from people woh lived in Sardinia and Anatolia, in modern-day Turkey. [The New York Times]

A MEMORABLE TRIBUTE. The London arts patron Delfina Entrecanales, who died earlier this year at the age of 94, was famous for her energy and candor, and it sounds like the speeches that were delivered in a breakfast in her honor this week lived up to her reputation. In the Art Newspaper, correspondent Louisa Buck reports on some of the remarks delivered by Aaron Cezar, the director of her Delfina Foundation. “There was fifty years between us: we laughed like kids, quarreled like teenagers and bickered like an old couple,” Cezar said. “We were a walking HR disaster.” [TAN]

One of the best eating places in London to e book...

‘London financing world remains to be all about your old skool...