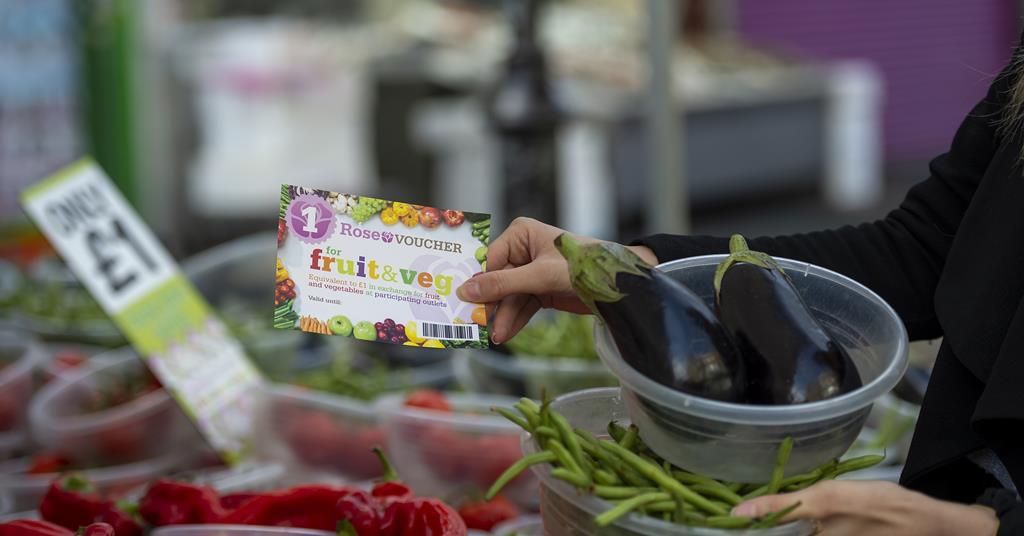 A new fruit and vegetable prescription project has been launched in London to help tackle health inequalities and food poverty.

Alexandra Rose Charity, working with public health teams in the London boroughs of Tower Hamlets and Lambeth, has introduced the new prescription model as part of a £250,000 pilot scheme.

The study will examine the viability of prescription fruits and vegetables as a long-term solution to combating diet-related diseases and food insecurity.

People will be prescribed rose vouchers for fruit and veg and will receive £6 a week in Tower Hamlets and £8 a week in Lambeth, plus £2 a week for each household member.

Participants can redeem their rose vouchers for fruit and vegetables of their choice at local retailers and market traders. At Tower Hamlets, they are also invited to attend monthly healthy lifestyle group sessions to improve their understanding of nutrition and health.

During the 12-month pilot, the vouchers will be distributed to 122 residents who are at risk or who have conditions such as high blood pressure, diabetes or mental illness and are struggling financially.

Projects are also carried out in partnership with non-profit organisations: the Bromley by Bow Center in Tower Hamlets and The Beacon Project in Lambeth.

“Diet-related diseases cost the NHS billions each year, but more importantly they limit the life chances of low-income people,” said Jonathan Pauling, CEO of Alexandra Rose Charity. “We hope that the Fruit & Veg on Prescription Project will make it easier for people who are struggling to access a healthy diet.”

“So many long-term and short-term illnesses are made significantly worse by a poor diet,” said Sam Everington, GP at Bromley by Bow, chairman of the NHS Tower Hamlets clinical assignment group and vice-president of the British Medical Association. “A healthy diet can often do far more than all the medication that I can prescribe as a family doctor.”

Grocery inflation has hit a record 13.3%, while YouGov research found that one in ten low-income Londoners survive on less than £3 a day on groceries. In addition, a further 4% had £10 or less on groceries and 2% said they spent “nothing at all” on groceries.

“The cost of living crisis is worsening, exacerbating rising diet-related diseases and food insecurity,” Pauling said. “When calories from unhealthy foods are three times cheaper than healthy alternatives, it makes sense that people would prioritize satiety over health, but that only poses problems for the future.”

Once evaluated, the pilot could be rolled out across the UK, subject to funding.

London religion leaders collect to debate well being inequalities within the...

Beauty dentist from London on the do’s and don’ts of enamel...