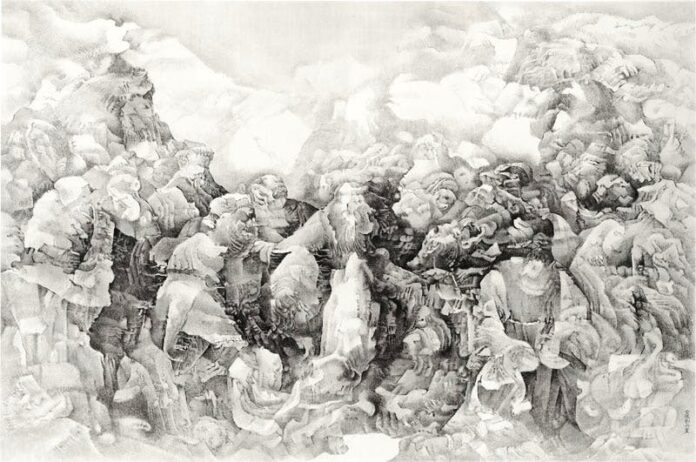 This is a preview from the November issue of Apollo magazine.
Click here to buy the latest issue

This year’s Asian Art in London (AAL; 5–14 November) is set against the widely publicised, highly politicised backdrop of Ai Weiwei’s retrospective at the Royal Academy of Arts (until 13 December). In 1995, the Chinese artist infamously smashed a Han dynasty vase, an action he recorded in a series of photographs, Dropping a Han Dynasty Urn, which are now on display in London alongside a group of similar vases painted in industrial paint (Coloured Vases, 2006). Whether one views these works as egotistical, sacrilegious acts or a poignant comment on the Chinese state’s wilful destruction of its cultural heritage during the Cultural Revolution, it’s a striking irony that only yards away from the RA, comparable, though untouched, Chinese works of art are venerated in the galleries of AAL participants.

The implosion of the Chinese stock market in August has imbued this year’s AAL with a hint of  trepidation. However, a heartening thought for those 52 dealers and six auction houses involved in the annual festival of museum and gallery exhibitions, lectures and sales is that New York’s Asian sales in September, though soft in parts, held up fairly well; the fact that a rare set of Huanghuali armchairs made $4.2m – a bullish price for classical Chinese furniture – during Christie’s $54.9m auction series suggests there is no reason for panic yet.

In recent years the boom in demand for Chinese imperial porcelain has dominated Asian market coverage thanks to fervent (and sometimes indiscriminate) procurement by mainland Chinese buyers, though this has now calmed and, rightly, become more selective as collectors acquire more knowledge. However, imperial Chinese wares are but one part of the artistic spectrum dating from antiquity to the present day that is represented at AAL, which transports the visitor from the Near to the Far East, journeying to India, Tibet and eventually Japan and Indonesia without leaving the streets of St James’s, Mayfair and Kensington Church Street.

Throughout its 18-year history, AAL has fostered a lecture and seminar programme, but this year the academic agenda boasts the first AAL Symposium for more than a decade, at the Royal Institution on Thursday 5 November. The day-long event explores ‘The Psychology of a Collector’, with speakers including Tao Wang, curator of Chinese art at the Art Institute of Chicago, Nicole Rousmanière, curator of Japanese arts at the British Museum, and the author William Dalrymple. The 2015 AAL Art Award for a two- and three-dimensional work of art is this year sponsored by Fortnum & Mason and Apollo (click here to view the shortlist); winners will be announced at the AAL Gala Party on Friday 6 November at Mandarin Oriental Hyde Park, where exhibits from the Fan Museum’s current ‘Made in China’ exhibition (until 31 December) will be on show.

Although AAL is a dealer-led initiative, it coincides with the major Asian auction series. Six auction houses – Bonhams, Christie’s, Dreweatts & Bloomsbury Auctions, Lyon & Turnbull, Sotheby’s and Woolley & Wallis – support the event, all holding sales or views in London in early November. Alongside their Chinese sales, Christie’s have two Japanese-focused events this year and one, dubbed Aesthetic Intuition (Wednesday 11 November), takes as its theme the history of Japanese art collecting in post-war London. Many of the great British collections of Japanese art were accumulated in this period, by the likes of Sir Frank Bowden, W.W. Winkworth, and Denys Eyre Bower, and this eclectic auction attempts to mirror their aesthetic. Alongside the sculpture, porcelain, screens, woodblock prints, and lacquer pieces is a hanging scroll of 1934 with a near life-sized portrait of the sumo wrestler Yoshinoyama Yojiro by Foujita Tsuguharu (1886–1968), painted in ink and colour on paper.

Many of London’s Asian art galleries have been in business for several generations, and the capital retains a wealth of inherited specialist knowledge and a reputation as a trustworthy place to buy for domestic and international collectors. Indeed, many Asian-based collectors still choose to buy in the UK rather than at home. Celebrating its 90th anniversary this year is Marchant, a fourth-generation firm founded in a shop off Chancery Lane in 1925 by Samuel Sydney Marchant, an ex-serviceman from Bow. In the booming post-war climate of the 1950s, Marchant, by then joined by his son Richard, dealt a thriving trade in Chinese and Japanese art. Now run by Richard’s son, Stuart, and his daughter Natalie, Marchant holds a show of Chinese jades every five years and marks AAL with a show of ‘Ninety Jades for 90 Years’, including vessels, animals, pendants, bracelets, buckles, snuff bottles, and scholar’s desk objects. They date from the Song to the Qing dynasty, with the majority from the Qianlong period (1736–95) such as the imperial-dated rhyton (‘gong’ vessel), the interior carved with a poem composed by the Qianlong emperor, with a mark corresponding to 1792 and of the period.

Also marking a milestone is John Berwald, whose 30th anniversary show, ‘Eight Transitional Treasures’, looks to a group of Chinese porcelain produced during the 50-year period marking the decline and fall of the Ming dynasty and establishment of the new Manchurian Qing dynasty. The style and subject matter of Chinese porcelain manufacture changed enormously from c. 1620 to the mid 1670s, as the straitened Ming Court reined in its spending and the imperial kilns began to accept orders from wealthy merchants and the gentry. Their tastes sparked an innovative period, particularly a preference for landscape and narrative decoration, as seen on the ‘elephant leg’ vase painted with the Daoist subject, Zhong Kui the demon queller. Thanks to centuries-old trade links and European imperialism, the Asian market has always been a global one, but in his 30 years of involvement, Berwald has seen many big players come and, if not disappear entirely, step back. ‘When I started, I saw the tail end of Japanese involvement – they were huge buyers until the banking bubble abruptly burst,’ he says. ‘Then the Americans purchased a lot of early Tang, famille rose and verte – their museums had a lot of spending power. Recently, of course, mainland Chinese buyers entered with absolute fervour.’ Cohen & Cohen also specialise in Chinese porcelain, specifically on European export wares which are the subject of their ‘Baroque and Roll’ exhibition. A highlight is a Qianlong-period tureen, cover and stand, its elaborate form inspired by baroque silver, which was made for the Scandinavian market (c. 1740).

Although AAL is still dominated by such classical collecting interests, contemporary art from across Asia, particularly that which pays dues to art-historical traditions of both the East and West, is increasingly prominent. Eskenazi dedicates its walls to 10 new works by the Chinese ink painter Liu Dan (b. 1953), with an exhibition that opened last month to catch the contemporary art pack in town for Frieze week.

This is Liu Dan’s first European solo show since his exhibition at the British Museum
in 2012 and, though demand for his work traditionally comes from Asia, that exhibition alongside those at the Metropolitan Museum of Art in New York and the Musée Guimet in Paris has, according to Eskenazi, broadened international interest. Four years in the making, the works are inspired by the artist’s interest in Renaissance drawings, so shown alongside Redefining Pleats of Matter (2015) is the Raphael drawing that influenced it, Saint Benedict Receiving Maurus and Placidus, on loan from a private collection. Prices range from around $300,000 to the low millions.

That desirable ‘timeless’ aesthetic, so appealing to collectors of all persuasions, also applies to jalis, intricately carved Indian wall divides. In 2012, Islamic and Indian art specialist Sam Fogg collaborated with another AAL dealer, Francesca Galloway, for a show of red stone jalis. Fogg returns to the theme this year with ‘Jalis: Stone Screens from Mughal India’, including marble and wooden examples. Among the most impressive is a panel with a recessed cusped arch, covered in flowers, probably originating from a Mughal palace or haveli (large house) in Rajasthan, and dating to c. 1680–1730.

Francesca Galloway, meanwhile, is dispersing Indian graphic art from the renowned Paul Walter collection. A voracious buyer, Walter has regular ‘clear-outs’ and this group reflects his varied interests ranging from Indian miniatures to photography. To coincide with the Victoria & Albert Museum’s ‘Fabric of India’ exhibition (until 10 January), Galloway has also put together an exhibition and catalogue of textiles and costume from across Asia, spanning 1800 years. It begins with a group of early textiles from the Silk Road – the earliest a fragment from the 2nd–4th century AD embroidered with Chinese dragons entwined by Hellenistic vine stems (£38,000) – and culminates with a joyous early 20th-century Cambodian resist tie-dyed silk textile (kiet) depicting all manner of sea creatures, birds and mermaids (£33,000).

The highlight, says the gallery’s Christine Ramphal, is a group of Indian trade cloths that illustrate the cultural exchange between East and West: ‘They captured the imagination of Europe at the time. Some show European design through Indian eyes and one example was embroidered in England but takes its design repertoire from Indian palampores.’ A more literal cultural exchange is embodied by a 1930s art deco silk jacket made for H.M. Maharaja of Darbhanga, which he exchanged with Sir John Tarlton Whitty, Governor of Bihar. Whitty evidently got the better deal; his was a plain black dinner jacket.

Asian Art in London takes places at various venues across the capital from 5–14 November. Click here to browse the 2015 AAL Art Award Shortlist.

Buy the latest issue of Apollo

Search our Art Diary for more events near you

The Chinese language tea bowl that may be a minor miracle...

The couple Hauser & Wirth purchase the Groucho non-public membership in...

The Day – The New London Poet Laureate hopes to be...