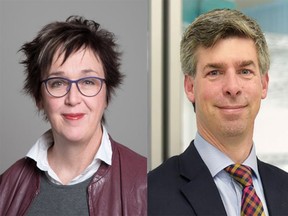 Two high-profile vice-presidents are no longer at London Health Sciences Centre, as the region’s largest hospital rejigs its top ranks during the post-emergency phase of the COVID-19 pandemic.

The hospital would not confirm whether Kearns and Young-Ritchie were terminated or the severance terms of their departures, citing employee confidentiality, but said it is working to establish a “smaller, tighter executive leadership team to drive LHSC’s evolution.”

“This leadership structure not only aligns with the changed operating environment but also reflects the best practices of our peers nationally and internationally,” the hospital said in a statement.

“Once implemented, the new closely knit and highly collaborative leadership team will form part of a simpler, flatter and more responsive management structure.”

Kearns was an integrated vice-president of diagnostic services, a shared position between LHSC and St. Joseph’s Health Care London. St. Joseph’s confirmed Wednesday Kearns is no longer working for that hospital, either.

Both Kearns and Young-Ritchie were often in the public eye during LHSC’s pandemic response.

Kearns helped oversee the pathology and laboratory medicine (PaLM) lab, a joint venture of LHSC and St. Joseph’s that processed many of the region’s COVID-19 test swabs throughout the pandemic. The hospitals rushed to equip the Victoria Hospital lab to process COVID-19 tests in March 2020, followed by other expansion efforts during the pandemic.

Young-Ritchie regularly participated in the Middlesex-London Health Unit’s virtual COVID-19 briefings and was often a spokesperson for LHSC’s pandemic response.

Neither Kearns nor Young-Ritchie could be reached for comment.

LHSC lost five executives in the first half of 2021, including president and chief executive Paul Woods, who was abruptly turfed by the board after revelations he had travelled to the U.S. multiple times during the pandemic, when federal and provincial governments were advising against travel.

Woods launched a $3.5-million wrongful dismissal lawsuit against LHSC, an action against which the hospital vowed to defend itself. None of the allegations have been proven in court.

Neil Johnson, the hospital’s chief operating officer, and Susan Nickle, its chief people officer and general counsel, were let go June 9, 2021. At the time, LHSC president and chief executive Jackie Schleifer Taylor said the moves were necessary to help the hospital respond to the post-emergency phase of the pandemic.

On Jan. 5, 2021, LHSC announced its former clinical programs vice-president Julie Trpkovski was no longer with the organization.

Woods and the four other executives received more than $1.5 million in salary and benefits last year despite exiting LHSC in the first half of 2021, according to Ontario’s public sector salary disclosures.

Victory in court docket to stop historic tree from being relocated...

My enterprise in London: Naomi Shimada