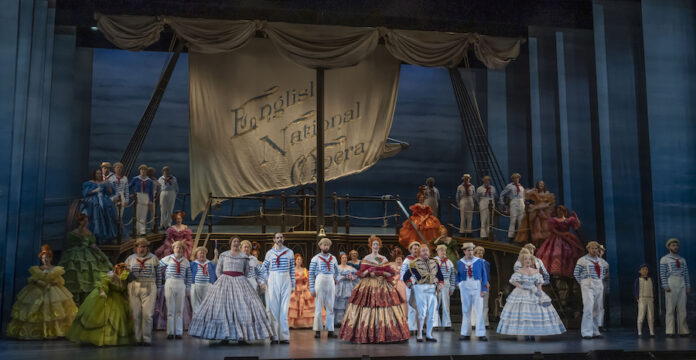 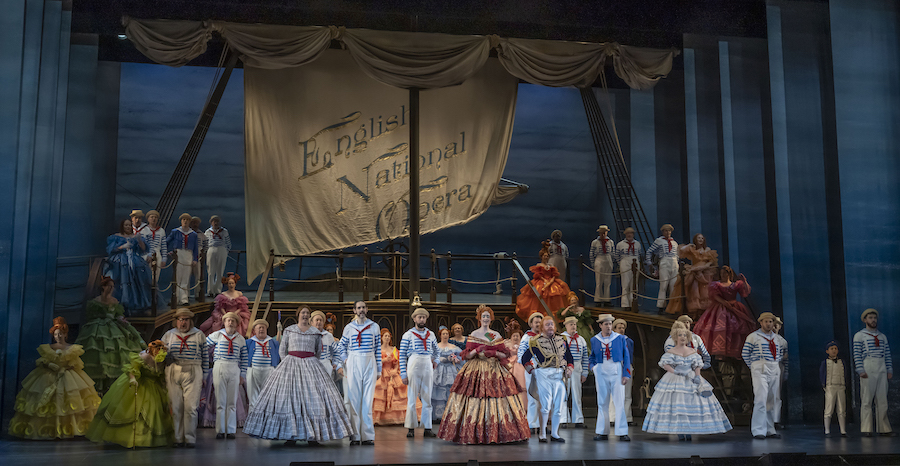 “The land without music”: this was the singularly insulting epithet that the German journalist Oscar A.H. Schmitz applied to England in a book of that title published in the early twentieth century. The chauvinistic Schmitz was evidently unfamiliar with the vast and varied cosmos of English folk music, not to mention the wonders of the country’s Renaissance choral tradition. But maybe Schmitz thought such music didn’t count: what he meant was that England lacked a national symphonic or operatic idiom that could compare to the illustrious heritage of Austro-German music, or indeed to England’s own achievements in literature, drama, and painting. London had been a major musical hub for centuries, but it functioned less as an incubator for homegrown talent than as a bustling international marketplace where foreign composers might find adoring audiences and abundant financial support. Think of Joseph Haydn, who composed his twelve “London” Symphonies during two extended stays in the city, or George Frideric Handel, who moved to England at the age of twenty-five and, evidently gratified by the hero worship and generous royal patronage that greeted him, made the country his home for the rest of his life.

Today, roughly a century after Schmitz’s book was published, no one would dream of calling England a land without music—and I’m referring not to pop music, which has been in a state of perpetual British invasion for the past sixty years, from the Beatles to Radiohead to James Blake, but rather to the niche market that is contemporary orchestral music and opera. Throughout the past century, and especially in the last few decades, arguably no country on earth has produced a richer or more varied body of such works than the UK. Its leading twentieth- and twenty-first-century composers—Benjamin Britten, Thomas Adès, Harrison Birtwistle, George Benjamin, Oliver Knussen, Judith Weir, Michael Tippett, Helen Grime, and Mark-Anthony Turnage, to name only a few—are notable not only for their brilliance but also their aesthetic diversity: no two composers on that list sound all that much alike.

What makes this kind of national creative ferment possible? And once a culture has become fertile ground for musical innovation, how does it sustain it? One factor is potently straightforward: classical music in the UK has long enjoyed the kind of robust public support that American artists can only dream of. At the moment, however, the integrity and consistency of that support is seriously at risk, as a result of a dismaying announcement in November from Arts Council England (ACE).

The Arts Council is currently engaged in an effort—in many ways a laudable one—to broaden the scope of its funding by supporting newer, smaller, and more agile organizations than it has in the past. It has also announced an explicit priority of supporting organizations based outside London, with the justification that the capital city has long devoured an outsized proportion of national resources. Unfortunately the council is attempting to achieve this redistribution through whiplash-inducing swerves that could gut some of the country’s flagship cultural institutions and imperil the livelihoods of thousands of arts employees. Perhaps most notably, the latest round of funding cut off annual support for the English National Opera (ENO) as well as one of the country’s essential instrumental ensembles, the Britten Sinfonia. The Royal Opera House at Covent Garden and Glyndebourne Productions also saw significant decreases in funding.

Most bizarrely, the Arts Council offered the ENO a one-time grant of £17 million whose primary function is to coerce the company out of London: the first £7 million, distributed between April and October 2023, would give the ENO time “to restructure,” and the remaining £10 million would be used “to completely reimagine and relocate the company” to another city, possibly Manchester. This can hardly be considered a good-faith offer: an organization that has spent nearly a century cultivating a London audience cannot seriously be expected to suddenly reconstitute itself in a smaller city without shriveling beyond recognition. Adding a slightly surreal tinge to the matter is the fact that if the ENO headed north, it would potentially encroach on the turf of another company, Opera North, which was founded in the 1970s by the ENO as its northern affiliate and whose original name was ENO North.

These cuts would be somewhat easier to stomach if the Arts Council itself were in dire straits, but that’s patently not the case. The British government increased its annual funding from £407 million per year in 2018–2022 to £446 million per year in 2023–2026. It would surely have been possible to fund new organizations and even to redirect some funding away from the big ones in London without pulling the rug out from under anyone’s feet. It is hard to see this decision as anything other than punitive and misguidedly anti-elitist.

One of the milestones in twentieth-century British musical history was the premiere of Benjamin Britten’s opera Peter Grimes in 1945 at Sadler’s Wells Opera in London. In spite of its grim subject matter—loneliness, poverty, and the death of children in a remote English fishing village—Grimes was an immediate hit and secured a place in the international repertoire that few British operas ever had. In 1974, Sadler’s Wells Opera rebranded itself with the name it has held ever since: the English National Opera.

Though its name suggests preeminence, the ENO is the smaller of the two major opera companies based in London, after the Royal Opera House. It owes its distinct artistic personality in part to its unusual policy of performing exclusively in English, for reasons of accessibility. (An exception to this rule was made in recent years for Philip Glass’s Akhnaten and Satyagraha, whose hypnotic settings of Sanskrit, Akkadian, ancient Egyptian, and Biblical Hebrew do not readily lend themselves to translation.) The ENO has also long served as an essential training ground for British singers on the verge of international careers; it would be a devastating loss to the country’s younger artists if the globally oriented Royal Opera House were the only game in town.

In its repertoire, the ENO has historically gone to further extremes of both populism and avant-garde experimentation than the Royal Opera House has: Gilbert and Sullivan’s operettas are an ENO staple, but the company has also been the site of numerous world premieres, including Harrison Birtwistle’s The Mask of Orpheus (1986). There is a case to be made that The Mask of Orpheus is the single most ambitious opera of the twentieth century, and the task of bringing it to life became something of a poisoned chalice among British opera companies throughout the 1970s and 1980s. The orchestral forces were so gargantuan, the music so formidably difficult, and the opera’s development so protracted that plans to produce the work at both the Royal Opera House and the Glyndebourne Festival ultimately fell through before the ENO took up the challenge. It is still the only company ever to present staged performances of The Mask of Orpheus; the piece was revived in 2019 in a new production. The company’s triumphs go far beyond premieres by British composers: in recent years, Glass’s majestic, trancelike early operas have become unlikely ENO audience favorites. Phelim McDermott’s production of Akhnaten is being revived next year for the third time since it debuted in 2016.

It is hilariously apt that Darren Henley, the Arts Council’s chief executive, holds (according to his biography on ACE’s website) “a doctorate exploring the role of the outsider as an agent for change.” Indeed: only an outsider, in the sense of someone with no particular expertise in the field of opera, would bludgeon one of the UK’s most beloved companies with such self-congratulatory disregard. In a gratingly earnest opinion piece published in The Guardian in mid-November, Henley wrote that the Arts Council “needs to be focused on the future of opera…opera in car parks, opera in pubs, opera on your tablet. New ideas may seem heretic to traditionalists, but fresh thinking helps the art form reimagine itself and remain exciting and meaningful to future generations of audiences and artists.”

I am incapable of understanding the notion that watching opera on a tablet or other screen is somehow at odds with large-scale live performance. People also watch football on screens, but I’ve never seen anyone argue that stadiums are therefore unnecessary or elitist. It’s generally understood that a TV broadcast of a football game will only work if it is played in a well-equipped, purpose-built arena in front of thousands of fans. And while it’s true that inventive directors have staged operas in parking garages and bars, I have yet to encounter any artist or audience member who thinks that such alternative venues, which often have less-than-ideal acoustics and limited technical capacity, ought to become the primary ones. I wonder what the public reaction would be if a top sports executive proclaimed that “the future of football is not in elite stadiums in big cities, but rather in public parks and high school fields, in backyards and back alleys.”

I have not seen a single artist speak up to express support for the Arts Council’s plans to decimate organizations like the ENO and the Britten Sinfonia. It would be one thing if these were widely thought to be excessively powerful behemoths that deserved to be broken up or doddering dinosaurs that had outlived their usefulness. On the contrary, they are beloved and still-vital institutions, with loyal followings among audiences and artists alike. As of this writing, over 80,000 people have signed a petition started by the eminent bass-baritone Sir Bryn Terfel to reinstate the ENO’s funding. If the Arts Council genuinely wants to fulfill the needs of the UK’s artists, cultural workers, and art lovers, then it ought to take this anguished reaction to heart. It is not the art form of opera but rather the Arts Council itself that badly needs to “reimagine” its place in this always-fragile ecosystem.

The London-area well being unit is briefly appointing a brand new...

The story behind the most recent sculpture in central London