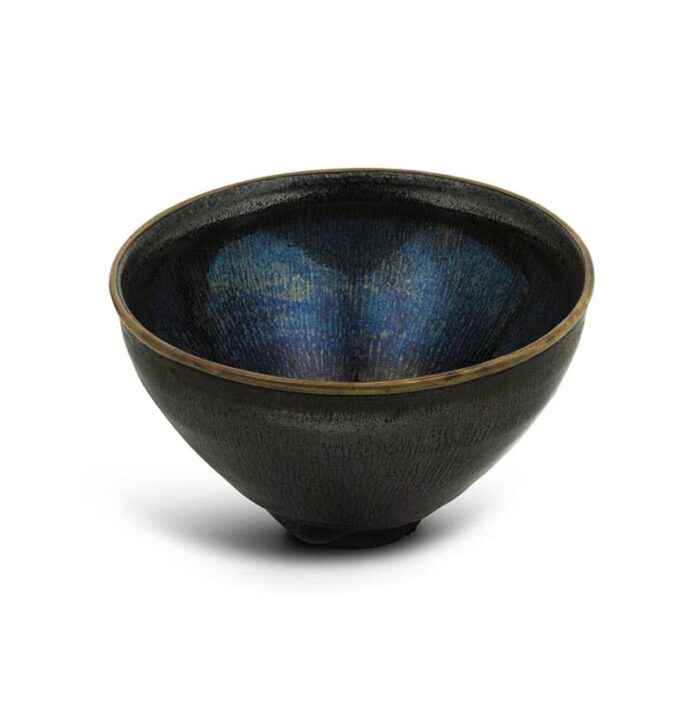 <!– The Chinese tea bowl that is a minor miracle | Apollo Magazine

Paradoxically, the superlative, must-see object in the London Asian Art Week sales is arguably also the easiest to overlook. This is the nogime tenmoku tea bowl offered by Sotheby’s London during its Important Chinese Art sale on 9 November. It is small, unassuming and apparently black. Cradle it in your hands, turn it and inspect it in good light – or better still, shine a torch into it (a phone flashlight does the trick) – and you are beholding a minor miracle.

For this glaze is not black but a shimmering iridescence of blues and greens that could rival the wings of any butterfly or peacock feather. Threading their way through the subtly glimmering hues are delicate radiant striations that range in colour from silver and silvery-blue to brown. Among them sit tiny ‘oil-spot’ teardrops – less like the eyes of peacock feather, perhaps, than the iris of an eyeball. The Japanese term for this glaze is nogime – ear of grain – while in China and the West it is ‘hare’s fur’.

If this were not enough, the unctuous glaze on the outside of the stoneware vessel has been allowed to slide down from the rim but not completely reach the foot, and it just hangs there, bulging in suspense.

Such near-black glazes were deemed most desirable for tea bowls because tea was prepared using powdered leaves that had been pressed into dried cakes and whipped with hot water, and the white froth produced was shown to best advantage against these deep, dark grounds. As the Song dynasty scholar Cai Xiang (1012–67) noted in The Record of Tea: ‘Tea is of light colour and looks best in black cups. The cups made at Jianyang are bluish-black in colour, marked like the fur of a hare. Being of rather thick fabric they retain the heat, so that when once warmed through they cool very slowly, and they are additionally valued on this account. None of the cups produced at other places can rival these. Blue and white cups are not used by those who give tea-tasting parties.’

Such was the demand for such tea wares that the Jian kilns of Fujian province produced nothing else. But to imagine that every bowl produced there resembled this one, even during the glory days of the Southern Song period (1127–1279) when it was made, could not be further from the truth. A glaze effect as remarkable as this was a fortuitous accident, a rare and random outcome of excess iron in the glaze being forced out during firing.

What makes this tea bowl even more exceptional is its history. It may well have been one of the first tea bowls brought into Japan during the Kamakura period (1185–1333) by Japanese monks who encountered the art of ritual tea drinking in the Buddhist temples of southern China. Tea was held to have beneficial effects on the body and mind, and was drunk for medicinal purposes, as it still is in Asia. Its ritualised preparation played a central role in Buddhist ceremonies.

It is known that this bowl was in use for centuries in the Doshoan, an important medicine studio in Kyoto founded during the Kamakura period by Kinoshita Dosho (1171–1247) who had studied Buddhism and medicine in China for five years. According to Takahashi Yoshio’s magisterial nine-volume catalogue of masterpiece tea utensils published 1921–25, this tea bowl was used by Mikyodo (1615?–90), master of the Doshoan studio, who passed it to the Fujita family in Osaka. If we are to believe the inscription on its paulownia wood box, it had also belonged to the Shogun Yoshimitsu Ashikaga (1358–1408).

There is no doubt that the bowl has always been revered. Some time during the 15th or 16th century, it was given a very superior Ryukyu mother-of-pearl inlaid lacquer stand, unusually ornamented with an abstract diaper pattern. Both were given silk draw-string pouches with a tailor-made cushion inside, and fitted snugly into both wood and lacquer boxes, and thus were able to survive intact for a thousand years.

‘Hair’s fur’ tea bowls of this quality are exceedingly rare. Sotheby’s cites four comparable examples, including one in the Metropolitan Museum of Art and another that the auction house sold in London in May 2011, also with its Japanese lacquer stand, pouches, and lacquer and wooden boxes. That was estimated at £500,000–£700,000 and fetched £1.1m. This one comes with an estimate of £300,000–£400,000. Its expectations are a quite different point.

London arts venues closed as a result of Queen’s dying –...

what it means for London’s galleries, music venues, museums and golf...