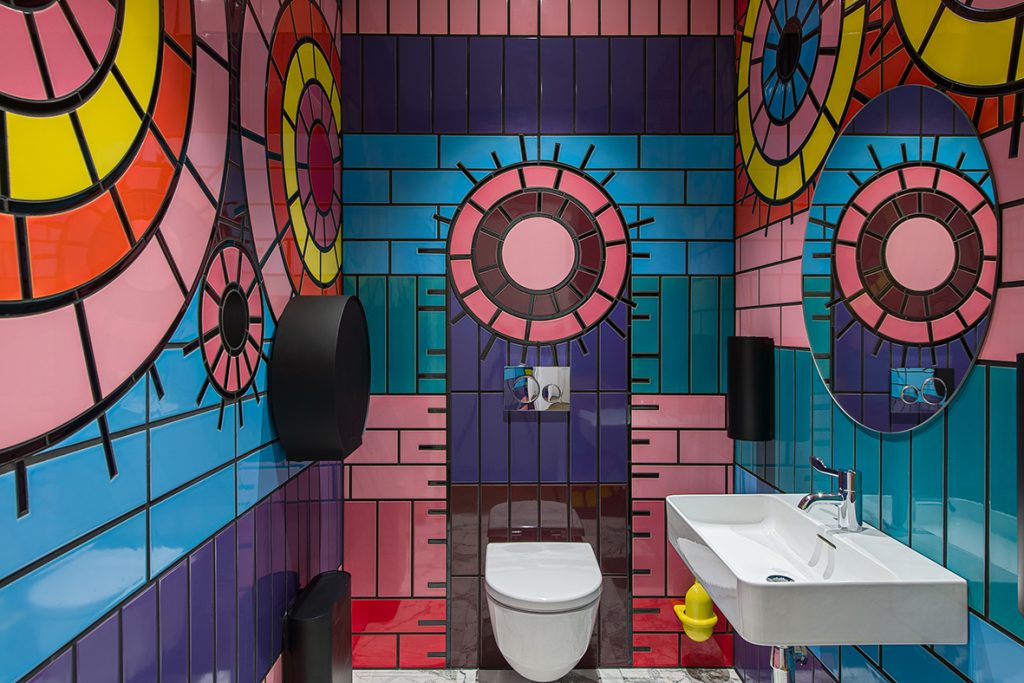 Artist-designed restrooms and gardens, a queer care camp, and work inside and outside the gallery of California-based William Scott are among the offerings at South London’s revamped Studio Voltaire.

The non-profit arts organization will reopen on October 15 after a £2.8million refurbishment that has vastly increased the space for artists and the public.

The main gallery, housed in what was once a Victorian mission hall, is the first major survey of Scott’s work. It features 70 paintings, drawings and sculptures from the early 1990s to the present and is accompanied by large scale installations at locations around Clapham.

Visitors arriving at Studio Voltaire are greeted by a garden created by local artist Anthea Hamilton, who was inspired by South London’s native gardens. The planting scheme combines ornamental flowers and shrubs with edible plants.

In the gallery is another commission – The Institute For The Magical Effect Of Actually Giving A Shit (A Note to Our Future Self). This was created by Joanne Tatham and Tom O’Sullivan and their first permanent commission can be seen in Studio Voltaire’s public toilets.

Joanne Tatham & Tom O’Sullivan, The Institute for Magical Effect actually giving a shit (A Note on Our Future Selves). Commissioned by Studio Voltaire – Image courtesy of the artists and the Modern Institute Toby Webster

Running through October 25, Queer Care Camp is a place for LGBTQIA+ creators and their allies to share resources and ideas. This runs until October 25th and takes place in The Studio – a dedicated learning and events space with its own garden.

More than 60 artists now work at the venue, including ActionSpace, which supports artists with learning disabilities.

“The Studio Voltaire Capital Project was the largest venture in the history of our organization,” said Joe Scotland, director of Studio Voltaire. “We are thrilled to have completed it and very excited to welcome the public to our new buildings.

“Studio Voltaire is committed to supporting artists, and this significant and timely transformation allows us to do so on a vastly larger scale.”

Studio Voltaire, a national portfolio organization of Arts Council England, was newly founded 27 years ago with a mission to advocate for emerging and under-represented artists and practices, with an emphasis on risk-taking and experimentation.

The redevelopment was designed by Matheson Whiteley and is the London-based architect’s first public project in the UK.

“Studio Voltaire supports a wide range of artistic activities and important practices,” said Jason Whiteley, director at Matheson Whiteley. “We wanted to make these activities more visible by offering new and better spaces for artists, visitors and the wider community.

“There were many things that needed to be fixed and replaced, and with each job we wanted to add something to Studio Voltaire. It tried to be effective with the money we had to spend – there were a lot of sustainability and efficiency ideas.

“And the level of collaboration with the contractors made much more possible than standard construction.”

Antelope unveiled on the Fourth Plinth in Trafalgar Sq. – Mayor...