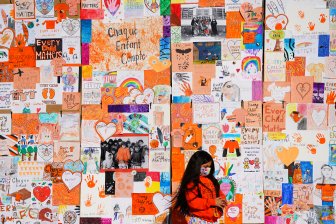 A new mural honoring the survivors of Canada’s boarding school system and remembering the children who have died was unveiled outside the N’Amerind Friendship Centre.

Presented in part by the Friendship Centre, London, Ontario, city officials and the London Arts Council, the two-story, seven-panel mural is the result of a collaboration between Ojibwe educator and artist Mike Cywink, residential home survivors and Indigenous youth artists.

Truth and reconciliation are an “ongoing process,” say indigenous voices

Here, on the north wall of the N’Amerind Friendship Centre, is a new mural which was unveiled today and is meant to honor the survivors of Canada’s boarding school system, along with the children who did not survive. The track is called We Are Still Here #LdnOnt pic.twitter.com/sr4RFmRfrs

The artwork is titled We Are Still Here, but each panel carries its own name and meaning.

The seven plaques, as seen from left to right looking from Horton Street towards the south wall of the N’Amerind Friendship Center, are titled Story Tellers, Where We Were, Our Creation Stories, 215, Breaking The Cycle, Now and Great tree of peace

Friday’s unveiling also included speeches, prayers, jingle dress dancing, songs and a gathering of at least 200 people at the corner of Colborne Street and Horton Street.

It was a day of mixed feelings for Cywink, the main artist behind We Are Still Here.

“I know we’re here to celebrate the good things and work and stuff, but it was still a tough morning for me. I think of the kids, the kids that never made it home from the dorms,” ​​Cywink said.

TRC’s 94 calls to action: Progress is being made, but more is needed, say indigenous advocates

Cywink, who hails from the Whitefish River First Nation near Manitoulin Island, describes his art as storytelling and says that speaking directly to boarding school survivors was particularly important to the narrative behind We Are Still Here.

“I tell a story that’s partly mine — I’ve never attended boarding schools, but a lot of the people I care about and love have … I think the counseling[with survivors]was pretty important to make sure that.” I tell the story correctly,” Cywink added.

“I think there’s a lot of responsibility that comes with public art, especially indigenous art, because I feel like I partially represent a large part of the indigenous community, so making sure I’m telling the story correctly was so important factor for me and then just making sure we’re doing a good job.”

Sir Frederick Nicholas, 16, is one of three Indigenous youth artists selected to help with We Are Still Here, an opportunity the young artist considers a great honor.

“I didn’t know exactly how big the project was and how big it was going to be in the community, I just knew I’m making paintings, they’ll be put on the side of the building, everyone will see them. But being here today, I’m starting to realize how much this means to everyone,” Nicholas said.

Nicholas, a member of the Turtle Clan from Oneida Six Nations of the Grand River, describes Cywink as someone he looks up to and hopes to work with again in the future.

As for the work, he said he felt a lot of pressure getting to the finished product, but he’s proud now that it’s all said and done.

“Now that they’re up, we know for sure that we got it right.”

Sir Frederick Nicholas wears a shirt modeled after one worn by his late great-grandfather at the We Are Still Here unveiling on Friday.

During the mural’s unveiling on Friday, Nicholas wore a shirt modeled after another worn by his late great-grandfather. The iconic garment was made by his mother in a single day, a feat Nicholas describes as “not easy to accomplish”.

“He was wearing a shirt like that, he was buried in it. When I put it on, I feel like I feel a lot more connection to him… I have his name and now I have one of his shirts,” Nicholas said, adding that that connection is evident in his contributions to “We Are Still Here” was reflected.

“Not only did I leave a piece of myself in these artworks, I feel like I left a piece of him in them as well so that he will be remembered.”

Both Cywink and Nicholas hope the artwork will inspire viewers to learn more about Aboriginal history and the history of Canada’s boarding school system.

At least 200 people gathered on the Colborne/Horton corner as the crowd prepared to greet the new mural outside the N’Amerind Friendship Centre. At the moment witnessing a performance by jingle dress dancers #LdnOnt pic.twitter.com/Bcz05Mkq2k

Singles occasions are storming London, that is what folks give it...