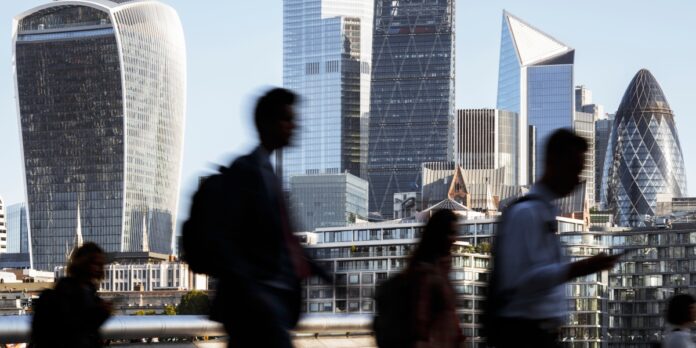 Companies in London’s famously exclusive financial sector have been issued an ambitious target aimed at boosting class diversity within their walls.

In a new report on Wednesday, the City of London Corporation—the body that oversees the U.K. capital’s financial district—called on Britain’s financial sector to do more to facilitate social mobility.

The organization urged the financial and professional services sector to “act now to boost socio-economic diversity in the boardroom,” and called on companies in the industry to aim for at least half of their senior leaders to come from working-class or lower socioeconomic backgrounds by 2030.

Senior leadership positions are regarded as board, executive or partner level and the two rungs below those roles.

Some companies within the sector define employees as working class if they have a parent who held a “routine or manual” job such as a bus driver or a cleaner.

Although half of all employees in the U.K.’s finance sector are from non-professional backgrounds, the City of London Corporation said career progression happened 25% more slowly for these workers than their middle- or upper-class counterparts.

The report and its recommendations were produced with input from a number of non-profits including the Social Mobility Foundation, the Sutton Trust and Bridge Group.

Its authors said on Wednesday that the target of boosting non-professional workers to 50% of senior leaders in the finance sector by 2030 would be reviewed in 2025 “to ensure it remains representative and achievable.”

Researchers working on the report found that 37% of senior leaders in the U.K.’s financial services sector currently came from a non-professional background.

“Employees from non-professional backgrounds are also likely to get paid up to £17,500k less per year—with zero link to job performance,” the organization said in a release.

In a statement on Wednesday, Catherine McGuinness, chair of the City of London Corporation-led socio-economic diversity taskforce, said it was crucial that British financial and professional services firms act immediately to “enable talented people to rise to the top whatever their background.”

“We need to break the ‘class’ ceiling—removing unfair barriers to progression is not only the right thing to do, it will enable firms to boost productivity, retention levels and innovation,” she said.

Andy Haldane, the taskforce’s co-chair, added that “for too long, personal growth has been constrained by people’s socio-economic background.”

“Today’s recommendations signal a break from the past, with financial and professional services playing a leading role in unleashing the potential in people, organizations and the economy at large,” he said in a statement.

Fortune reached out to a handful of London’s biggest finance companies, including HSBC, Aviva and Lloyds Banking Group, but none had responded prior to publication.

An earlier report from the City of London Corporation found that 45% of senior roles within the financial sector were held by white men from professional backgrounds.

However, social mobility isn’t the only diversity problem that exists within the industry, despite an overwhelming majority of the sector’s CEOs believing diversity enhances business performance.

In a report on the U.K.’s finance sector last year, the Bank of England and the industry’s regulator said “large gender and ethnicity pay gaps still exist in the financial sector, there are parts of the industry which lack diversity at senior levels, and the products offered to customers still do not always meet the needs of disadvantaged groups.”

Earlier this year, Britain’s financial watchdog said it planned to publish new requirements for boosting ethnic diversity in the industry.

Our new weekly Impact Report newsletter will examine how ESG news and trends are shaping the roles and responsibilities of today’s executives—and how they can best navigate those challenges. Subscribe here.