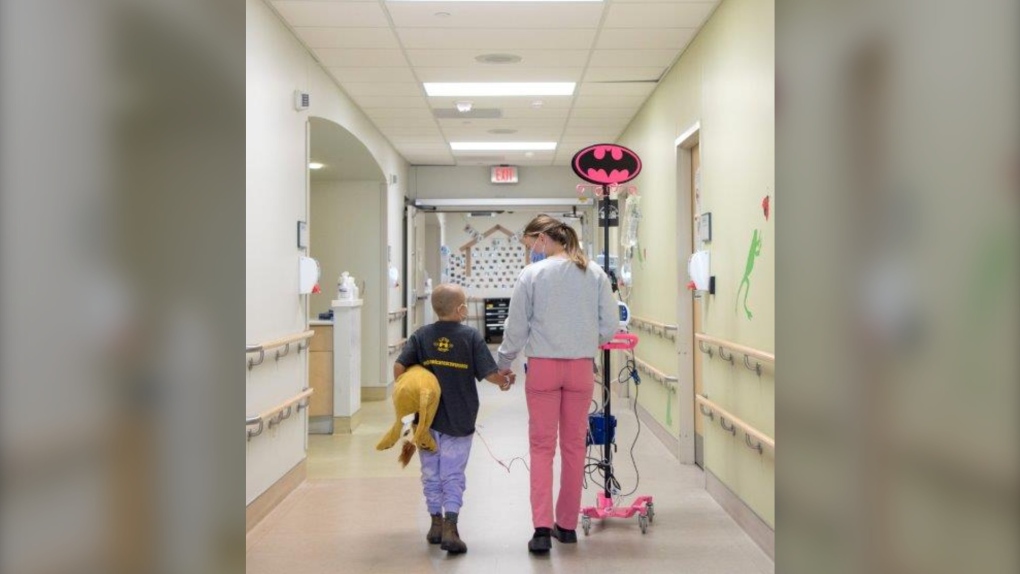 Children’s Hospital in London is celebrating its anniversary on Saturday, marking 100 years of providing exemplary care to the smallest of patients.

According to a press release from London Health Sciences Centre (LHSC), Oct. 29 will mark the 100th anniversary of the Children’s Hospital, which has seen care provided to hundreds of thousands of patients, and “global recognition for medical firsts and technological advancements.”

Children’s Hospital first opened its door in 1922, and upon reflecting upon the achievements over the past century, the LHSC recognizes there is a lot to celebrate. A few of the biggest milestones for Children’s Hospital include:

A nurse walks with a child patient at Children’s Hospital in London, Ont. in this undated image. (Source: London Health Sciences Centre)

For Nash Syed, president of Children’s Hospital, the success of the past 100 years has him looking far ahead to the future.

“This is so much more than just celebrating a legacy of care,” said Syed in the release. “This is about building the future of health care for children. I am incredibly proud of what this hospital has accomplished in the last 100 years, and I have no doubt that the excitement felt for achieving this milestone will carry us through the next 100, 200 and even 300 years.

One of the biggest milestone moments for Children’s Hospital is the case of Steven McLean.

McLean was born prematurely in 1991, and at the time received lifesaving care in the NICU. Following that initial visit was countless appointments, 30 operations and 100 emergency room visits by the time he turned 18.

Inspired by the compassionate care he and his family received at Children’s Hospital, McLean decided to become a registered nurse in family medicine at LHSC.

“I am so grateful for the support I received at Children’s Hospital,” said McLean in the release. “At one point during my care, I was sad knowing that after I was healed, I wouldn’t see the staff at Children’s Hospital; I knew I would miss them. I owe so much to medicine, which is why I’m proud to be an RN [registered nurse].”

Scott Fortnum, president and CEO of Children’s Health Foundation, recognizes that community support has played a critical role in making Children’s Hospital what it is today.

“With our community’s continued support, our legacy of the best possible care for our kids, lives on at Children’s Hospital,” said Fortnum in the release. “You enable cutting-edge care, rehabilitation and research ensuring the best care for our young lives for the next century and beyond.”

“Children’s Hospital will continue to inspire the health care leaders of tomorrow, while being the heart of this healthy community,” the release reads.

How gardening bought cool– and the backyard fans to observe on...

Sims: London retirees’ path to COVID safety is thru Leamington

The London space has a dozen new COVID-19 circumstances